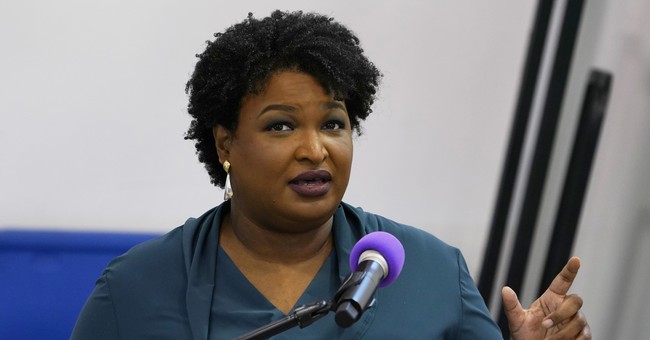 Ever since Georgia Democrat Stacey Abrams declared in December 2021 that she was running for reelection election in the state’s 2022 gubernatorial race, she has been dogged by critics and even some in the mainstream media over her persistent claims that the 2018 race between her and Republican Brian Kemp was “stolen.”

The response from the Abrams campaign, her supporters on the left and others in the MSM has been attempts at either completely revising her history of allegations that the system was “rigged” against her by Kemp, who was secretary of state at the time, or to simply ignore them as though she’d never made the claim.

When asked about it during a recent CNBC interview, Abrams went the gaslighting route, stating that “What I’ve always spoken to is the ability of voters to cast their ballots and have their ballots counted. There is not a single politician, including myself, who is entitled to win an election, and that was never my point” (which was a lie).

But in an interview she gave Monday to Axios media outlet, Abrams made a statement regarding questioning election results that will cause further headaches for Democrats heading into the 2022 midterms.

“I don’t ever want us to be in a place as Americans where we cannot legitimately question and critique systems and try to make them better,” Abrams told them before proceeding with playing word games in trying to differentiate her claims of a “stolen” election from former President Trump’s:

“What Trump has done is invalidate systems because he didn’t like the personal effect,” she said. “And he’s provided no information or proof of his allegations.”

The big problem here is that Abrams herself hasn’t provided any “information or proof” of her own allegations. In fact, as the Axios piece even noted, a federal judge threw out “most of Fair Fight’s [Abrams’ PAC] original complaints,” with her lawsuit against the state, which will be heard in April, now “narrowly focused.”

Further, Abrams is splitting hairs here in trying to make distinctions between what she did post-2018 election and what Trump did post-2020 election. In terms of the overall “message” Democrats and the media have tried to send about questioning election results over the last year, it’s a distinction without a difference.

That “message,” in a nutshell, has been that questioning election results in and of itself regardless of whether or not you take legal action is tantamount to the “Big Lie” and makes you an insurrection-y kind of person. It’s not true, because there have definitely been times in our nation’s electoral history where election results were questionable (which is why there are laws on the books about the legal process involved in raising the issue in a court of law about them).

But because Dems and their co-conspirators in the press have such a politically vested interest in perpetuating this false narrative going into the 2022 midterms and into the 2024 presidential election race, they have to keep hope alive out there that there will be enough people who are still outraged enough about the Capitol riot to vote against Republicans to the point it might give Dems an advantage at the ballot box.

But outside of diehard Democrats and Never Trump grifters, most people in this country have moved on from what happened on January 6th, 2021. In fact, there are several polls out there that show Trump besting Joe Biden, Kamala Harris, and Hillary Clinton should he run again in 2024, which tells you that the Democrat harping on the so-called “Trump-inspired insurrection” has not just fallen flat; it’s been nuked into the ground.

And going even beyond that, Abrams saying “I don’t ever want us to be in a place as Americans where we cannot legitimately question and critique systems and try to make them better” is exactly what many Trump supporters and Trump himself has said regarding the questioning of election results. So it’s going to be hard for Democrats to square her inconsistent and fumbling rhetoric on this topic with their own broader talking points about how it’s always wrong to do so (unless you happen to be a Democrat or Democrat super-lawyer).

The funny thing here is that it’s obvious Abrams thinks she’s making a solid case for toning down the allegations against her (and Democrats) that she and they are hypocrites. Except she’s not, and as the election gets closer, expect more in the “Big Lie”-driven media to do the major lifting for Abrams in order to extricate her and her party from the tangled web of their own making.

Should be fun to watch the pretzel logic involved. We’ll make sure to keep you posted.

Flashback: MSNBC Has Stacey Abrams Advise GOP on How to Accept Election Results, the Jokes Just Write Themselves