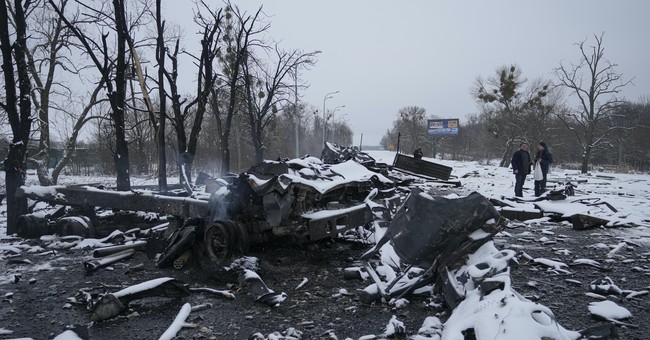 “St. Javelin of Ukraine.” It began as a meme on social media. It has now become a rallying cry for the brave people of Ukraine, as they face an increasingly-brutal assault from Vladimir Putin’s Russian Army.

The Javelin is a U.S.-made, shoulder-fired, anti-tank weapon that is proving to be the principal force behind the Ukrainian’s fierce resistance to the Russian onslaught.

As reported by EuroNews, the Javelin is “far from being a wonder weapon,” but “is nonetheless being lauded by many Ukrainians as an invaluable tool for the defenders slowing the advance of Russian ground forces further into its territory.”

Deployed for the past 20 years in the US military and 20 allied nations, the Ukrainian army now has more Javelin missiles than some NATO members, Russian defense minister Sergey Shoigu claimed in a meeting of Russia’s Security Council on Monday.

Scott Boston, a senior defense analyst at RAND Corporation, told EuroNews why the Javelin is proving to be so effective against the Russians.

Javelin is probably quite effective against most Russian armored vehicles, and it is probably more capable against heavy armor (like tanks) than any other missile system available to Ukraine that can be carried by an individual soldier.

Javelin’s warhead is excellent and the missile can be set to fly in a diving attack profile so that it impacts the less-well-protected roof of the target vehicle.

The missile is guided and is locked on to a specific target by the firer, so even if the target is moving, Javelin has a chance to hit it.

The U.S. furnished Ukraine with 300 missiles at the end of January, after having sent 180 projectiles and 30 launchers in October 2021, according to EuroNews.

As reported by Reuters on Saturday, Biden has ordered the U.S. State Department to release up to an additional $350 million worth of weapons from U.S. stocks to Ukraine as it continues its valiant fight against the Russian invasion.

According to the Ukrainian Ministry of Defense, as reported by Coffee or Die, “Ukraine has dealt Russian forces a heavy blow.” As of Friday of last week, Ukraine claims to have destroyed at least 80 tanks, 516 “armored combat vehicles of various types,” 10 aircraft, seven helicopters, and 2,800 “special staff.”

Coffee or Die spoke with U.S. Medal of Honor recipient Clint Romesha about the Javelin system and its use in conventional warfare. Before Romesha was awarded the Medal of Honor, he was “a tanker well versed in how Javelins and other anti-tank missiles work against tanks and other types of armor.”

Romesha received extensive training while serving in armor roles, according to Coffee or Die, taking part in rotations through Germany and South Korea, training to combat invasions as a tank crew member. “All of my training before 2001 was to stop a Russian invasion of Europe,” he said. And the Javelin’s effectiveness, according to Romesha?

If you could put one guy up on the side of a hill with six f**king Javelin missiles, you’re stopping an entire company of tanks with one guy. They don’t even know where that sh*t is coming from.

Typically, if you see a turret off a tank, that is because of some sort of top attack round ignited the ammo storage inside that [tank] that’ll lift that turret right the f**k off.

It might not put a tank 100% out of commission. But I do think it would definitely be down and sent back to maintenance to get refit — it’d be down for a decent portion of a battle.

The Javelin is equipped with a “fire-and-forget” system, according to EuroNews, which means soldiers can point and shoot before running for cover, unlike with traditional, guided anti-tank weapons. It also has a range of up to 2.5 miles, providing an advantage to infantrymen over fast-moving armored vehicles.

However, Javelin’s effectiveness is also limited by several factors, including topography and geographical constraints. Most central and eastern Ukraine is flat, according to EuroNews, so there are limited options to conceal its use.

But crap quickly gets real, as well:

Russia launched its large-scale invasion of Ukraine on January 24. As is the case in all wars, the situation remains fluid as hell. As reported by my colleague Streiff on Monday, Russia has warned other countries — including the U.S. — of “consequences” for providing weapons to Ukraine.

In addition, Putin-stooge extraordinaire, Belarus dictator Alexander Lukashenko was expected to send troops into Ukraine as soon as Monday to fight alongside Russian forces.

War is hell. It always will be. But for now, at least, “St. Javelin of Ukraine” continues to provide hope to the extraordinary men, women, and children of a very strong country indeed.

As Biden said during his hypocritical and embarrassing State of the Union speech on Monday night:

Putin may surround Kyiv with tanks, but he’ll never gain the hearts and souls of the Iranian people.

Cut him some slack, gang — Corn Pop’s pal was up way past his night-night time last night.

Wishful Thinking Aside, Putin Will ‘Win’ in the End — but at What Cost?