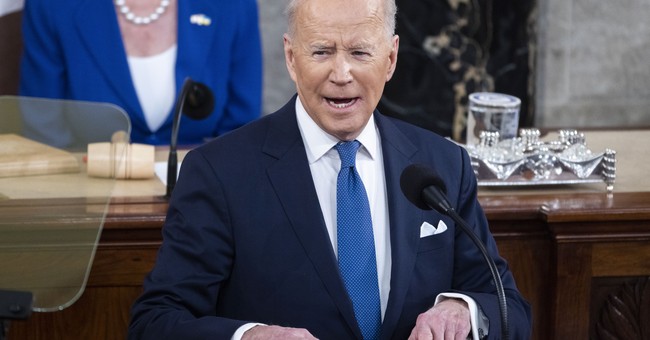 It was hard to say which was the more predominant feature of Joe Biden’s State of the Union speech. It was a toss-up between incredibly boring – a speech delivered with no real passion, no real accomplishments, and no appreciation of the true state of the union that he has done so wrong – and incredibly deceitful.

Even before he started in on the messy speech, he laid the groundwork of a cognitive dissonance that has been the hallmark of his time in office. While members of Congress were forbidden from having guests because of the “science” as they normally might at the SOTU, Jill Biden had as guests some of the people Joe was going to mention in his speech.

But when President Donald Trump had guests there as he dealt with the particular topics each might represent, He gave real attention to their stories. Biden mentioned names and moved on without another thought, that point of them being there almost an afterthought. Indeed it was often so poorly delivered, the topic they represented was unclear.

He kept talking about his plan, but as we noted earlier, that’s the “plan” that already went bust and isn’t going anywhere. So what was he truly saying here? Listen to things that aren’t going to happen but that live on in the unreality bubble in his head? But that didn’t stop him from lying about the dead plan. “My plan will not only lower costs to give families a fair shot; it will lower the deficit,” Biden claimed.

While he spent a lot of time talking about the plan, he didn’t truly address inflation or gas prices with any seriousness – the things that Americans care about.

Biden spoke about how he was going to release 30 million barrels of oil from our Strategic Reserve to deal with the potential consequences of rising gas prices in the country. That’s like robbing the savings account because you haven’t bothered to keep up the paycheck coming in – because Biden has cut back on our energy production options. He’s still buying 595,000 barrels a day from Russia a day, so how can he seriously talk about Russia without at least making plans to cut them off and increase our options, to ensure that we are energy independent? If he wouldn’t do that, he isn’t serious and he doesn’t care about how much that’s hurting Americans at the pump. He’s unconcerned about this because as White House Press Secretary Jen Psaki has said, they don’t think you should be using oil and gas anyway. Sen. Joe Manchin (D-WV) said he was going to be listening to what Biden said here because he wanted a ban on Russian oil and a move back to energy independence. But he got a whole lot of nothing from Biden.

In the disjointed rehash of speech which sounded like so many of his other Build Back Better remarks on other occasions, there was one huge glaring omission that should have been there. But its absence truly showed Biden’s priorities – any recognition of the 13 members of the military killed because he messed up in Afghanistan.

He also didn’t mention the Americans and allies he left behind. Indeed, he skipped the topic of Afghanistan entirely. But just because Biden hopes people will forget, they wouldn’t.

Rep. Lauren Boebert (R-CO) just couldn’t contain herself on it and you can hear her say “13 of them” when he talks about “flag-draped coffins.”

Biden also messed up the name of his SCOTUS nominee yet again.

So he just filled the space with anything.

He lied about creating jobs. Lied about buying only things made in America, when he just bought millions of COVID tests from China. Lied about Republicans trying to suppress the vote. Lied about the state of our union being strong.

Perhaps one of the most audacious lies was how he tried to act as though he cared about securing the border. “We need to secure the border and fix the immigration system,” he said. That didn’t go over well. It was even met with chants of “Build the wall.”

Biden closed with the words, “Go get him.” Get who? What the heck did that even pertain to? He didn’t seem to know.

It was a speech in disarray – matching the disarray that Biden has projected since taking office. Unfortunately, that’s the true state of our union under Joe Biden.