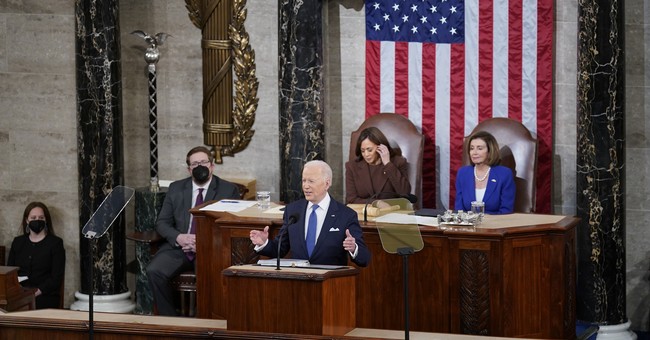 Joe Biden’s State of the Union lingered far too long, but the general theme was made clear within the first 30 minutes: This is a man with no accomplishments and he knows it.

Honestly, even as a conservative, I expected more. Biden’s speech was badly written, devoid of memorable moments, and came across as a rehash of everything he’s been saying for the last two years. The applause lines felt painfully manufactured, and the president often stumbled over his words — and that’s when he wasn’t coughing.

The first part of the speech focused on Ukraine in an obvious attempt to soften the audience with a topic most agree on. But instead of delivering that moment of unity successfully, Biden started rambling about the Iranians and pounds of Ukrainians for some reason.

Things only got worse from there. At another point, the president malfunctioned trying to deliver an applause line about the rust belt.

Regardless, I figured Biden would have his meltdowns. What I didn’t expect was for his speechwriter to be so inept. When a president is languishing in the high-30s in regards to approval rating, the last thing he needs to do is stitch together all his worst highlights of the last two years and redeliver them. Think I’m exaggerating? He retold the “joke” about deer wearing kevlar vests as a plug for gun control.

For over half an hour, Biden just repeated talking points about his Build Back Better bill. The problem? That bill is dead and isn’t coming back. Besides, does anyone think the average American suffering under record inflation is excited to pay for someone else’s childcare? People have seen what “more government” gets them over the last year, and by and large, they aren’t interested in another dose.

From there, it was more of the same. Biden went back to pushing for price controls, plugged free COVID-19 tests (which are already delayed), and then spent time on burn pits in Iraq and his son dying of cancer (those two events have never been connected). How unimpactful was this speech? It was so unimpactful that I’m having trouble right now even recalling anymore of it to mention. It’s like he woke up this afternoon, took his meds, and then gave this speech thinking it was January of 2021.

This was a speech from a president who believes he has a 60 percent approval rating when it’s actually 37 percent. This was a speech from a president who had nothing to actually say of note because his presidency has been a disaster. I understand he had to go out there and say something, but everything about Biden’s rhetoric smacked of spitting into the wind. He’s learned no lessons and he’s going to keep driving the country over a cliff. Even on the issue of gas prices, instead of pledging to increase domestic production, he went back to the well (or rather, he didn’t) of promising to release oil from the strategic reserves.

As to where I think things go next, I’m sure the media will proclaim this speech as a brilliant reset that has unified the country. No one outside the beltway actually saw that as they watched, though. There will be no polling bounce here. Biden’s performance was meandering at best and incoherent at worst. Worse, it offered no real solutions to struggling Americans. In short, it was a total flop.