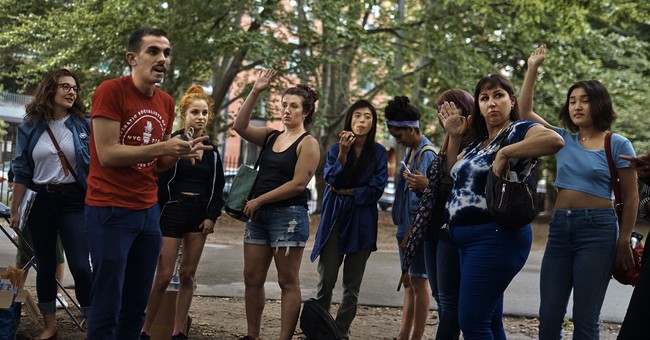 The Democratic Socialists of America (DSA) have always been the top political comedy act in this country and they unintentionally work very hard to keep it that way. Sure enough, their take on Ukraine has solidified their place at number one.

When Russia invaded Ukraine, the world was outraged, including Russia. The consensus was clear; Russia shouldn’t be doing this, they’re in the wrong, and they deserved to be punished for it. What’s more, we knew that this was the move of a dictator whose ambitions will cost the lives of many innocent people.

The DSA is in agreement…kind of.

As reported by the New York Post, the DSA condemns the actions of Russia as it will have a negative effect on the working class.

“We stand in solidarity with the working classes of Ukraine and Russia who will undoubtedly bear the brunt of this war, and with antiwar protestors in both countries and around the world who are calling for a diplomatic resolution,” the DSA said.

So far so good.

“There is no solution through war or further intervention. This crisis requires an immediate international antiwar response demanding de-escalation, international cooperation, and opposition to unilateral coercive measures, militarization, and other forms of economic and military brinkmanship that will only exacerbate the human toll of this conflict,” the lefty group said.

Okay, not too bad.

“DSA reaffirms our call for the US to withdraw from NATO and to end the imperialist expansionism that set the stage for this conflict,” the DSA said in a statement.

“While the failures of neoliberal order are clear to everyone, the ruling class is trying to build a new world, through a dystopic transition grounded in militarism, imperialism, and war. Socialists have a duty to build an alternative.”

There it is. The party of AOC and Bernie Sanders does it again.

The DSA isn’t particularly known for its wise decisions about any given subject matter and the suggestion that we leave an alliance of western countries in the midst of a time when war is at the doorstep is one of the most breathtakingly stupid things they’ve said.

Moreover, they’ve taken the blame off of Russia and put it on…western imperialism.

Forget the fact that President Joe Biden is the one who opened the door for this to happen through his relaxing sanctions for the Nord Stream 2 pipeline, or that Putin is a dictatorial maniac with dreams of expanding Russia’s borders through conquest. This, according to the radical left, is still America’s fault as a whole.

If the DSA was trying to protect the Democrat Party by placing the blame squarely on anyone but the party they currently have a firm hold on, they’re out of their minds…

…but we knew that already.

Funny enough, even Democrats seem to outright call the DSA out for their lunacy. New York Democrat congressional candidate Max Rose and Democrat gubernatorial candidate Tom Suozzi have both called out the DSA on social media, signaling their distance from the idea.

If you’d like to see more bad Ukraine takes, here are a couple more.

(READ: The Front-Runner for the Most Nonsensical Ukraine Take Emerges)