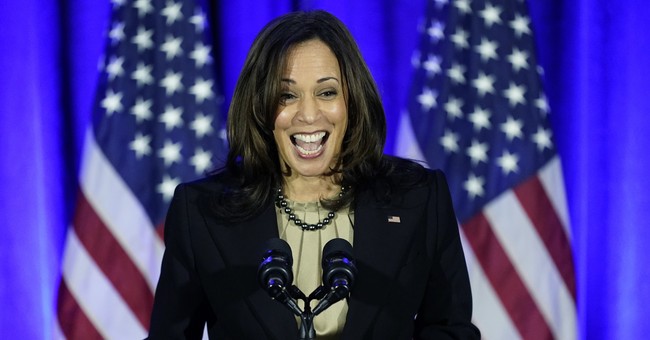 There’s a war going on in Europe, we have freedom being attacked both here and in places like Canada, and inflation is crushing Americans. You’d hope that would mean that people are acting seriously in the White House. Unfortunately, no such luck.

As we reported earlier, you have folks like Jill Biden introducing Kamala Harris as the “president,” then falling back and claiming she was joking. I seriously think the Bidens have a joke about Kamala wanting the office, mocking her behind the scenes, and that’s why they keep making this mistake. That might also explain in November at the infrastructure bill signing when they played “Hail to the Chief” as an intro to her remarks and then introduced her with the name of the person who was speaking after her, Heather Kurtenbach. You can see how thrilled Harris was with the song — and then not so much with the wrong name.

Harris has previously shown she wasn’t on the same page with Biden, refusing to talk about running again with Biden, repeatedly putting that question off when asked.

But on Monday, as she was speaking at a Black History Month event about people voting for her and Joe Biden, she had a maximum cringe moment. This might just match Joe Biden’s weird habit of whispering for creepy.

“Because as we all know, elections matter,” Harris said, while affecting some different accents as she went along. “When folks vote, they order what they want, and in this case, they got what they asked for…I went off script a little bit.”

No, some people were hoodwinked into thinking that Joe Biden was some kindly, old moderate who was going to secure “norms,” according to the media. They didn’t get what they asked for. Instead, they got a cantankerous, confused old man who is barely able to keep it together, and who has failed at virtually every challenge he has faced in office.

They didn’t ask for out-of-control inflation and sky-high gas prices (that are likely to go even higher now, with the war in Ukraine). They didn’t ask for rising crime or dividing people over COVID. They didn’t ask for foreign policy debacles like what he has done in Afghanistan, and how he has so far handled Russia. They also didn’t ask for Kamala Harris to be as incompetent a sidekick as she has turned out to be — failing at her chief assignment to address the problems of the border and being an unserious person in general.

Just like Joe Biden when Harris goes off-script, she gets into trouble. “They got what they asked for” also sounds like she’s giving Joe Biden a dig there. Usually when you say it like that – “you got what you asked for” – you’re not saying something positive. That might explain it, that she’s actually acknowledging how badly Joe has done, if she’s doing a passive-aggressive swipe at him.

But, I’m thinking even if some were deceived into voting for him, it sounds like many know it’s mistake they’re never going to make again if the new McLaughlin survey is any indication.