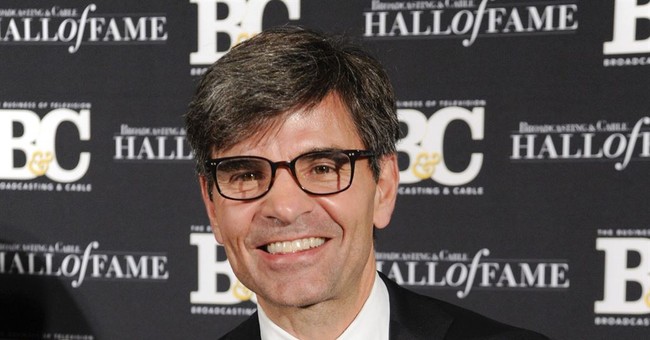 While I have no way of knowing — or giving a damn — if ABC “This Week” host George Stephanopoulos woke up on the wrong side of the bed Sunday morning, I do know that by the time he got to the studio, he was ready to do battle with Arkansas Republican Senator Tom Cotton over his favorite target: Donald Trump.

Unfortunately for Stephy, Cotton was more than ready to dismiss him and his stage four TDS nonsense.

As reported by NewsBusters, Stephanopoulos did his damnedest to frame Putin as an egomaniacal dictator, as seen through the ridiculous lens of White House Press Secretary Jen “Circle-Back” Psaki, his prior guest — while clearly on his way to trashing Trump.

We saw this announcement from Vladimir Putin this morning that he’s put his nuclear forces on a state of heightened alert right now. You saw my exchange with Jen Psaki. Is Vladimir Putin acting in a rational manner? Is it mentally there, or as your colleague Senator Rubio said, something is off right now?

Cotton refused to do a psychological evaluation of the Russian strongman, but he did denounce him — strongly so.

Ms. Psaki said that we all made the mistake of viewing Vladimir Putin as someone who sees the world through global norms. George, I never made that mistake. I have always seen Vladimir Putin as a ruthless dictator who wants to reassemble the greater Russian empire. […]

Thankfully the brave Ukrainian people are fighting back and every day they can hold out, George. They continue to stiffen the spines of leaders in the west. So we need to urge them on and we need to continue providing them the weapons they need to fight back.

You’ve never made that mistake, it is true. You’ve been stalwart in your opposition to Vladimir Putin. That cannot be said for the leader of your party, Donald Trump. Last night he finally condemned the invasion.

But he also repeated his praise of Putin, calling him smart. Earlier in the week he called him pretty smart. He called him savvy. He says NATO and the U.S. are dumb.

Are you prepared to condemn that kind of rhetoric from the leader of your party?

George, you’ve heard what I have to say about Vladimir Putin. That he is a ruthless dictator who’s launched a naked unprovoked war of aggression. Thankfully the Ukrainian army has anti-tank missiles that President Obama would not supply. That we did supply last time Republicans were in charge in Washington. That’s why it’s so urgent that we continue to supply those weapons to Ukraine.

Stephy, no doubt ready to cry: “Why can’t you condemn Donald Trump for those comments?”

George, if you want to know what Donald Trump thinks about Vladimir Putin or any other topic I would encourage you to invite him on your show. I don’t speak on behalf of other politicians. They can speak for themselves.

I speak on behalf of Arkansans. Who I talked to this week and who are appalled by what they saw in Ukraine and they want me right now to fight in Washington to support those brave Ukrainians.

Stephy, reaching for his blanky:

When Fox News asked him if he had a message for Vladimir Putin, he said he has no message. Why can’t you condemn that? I feel quite confident that If Barack Obama or Joe Biden said something like that, you’d be the first to criticize.

Again, George. If you want to talk to the former President about his views or his message, you can have him on your show. My message to Vladimir Putin is quite clear. He needs to leave Ukraine unless he wants to face moms and teenagers with molotov cocktails.

And grandmothers and grandfathers with AK-47s for years to come. I’m speaking on behalf of Arkansas who want me to send that message to him.

Stephanopoulos went on to try to get Cotton to say whether he would support a run by Trump in 2024 (if there is a God in heaven… never mind) but ran into the same steeled force the Arkansan used in refusing to condemn Trump, tossing Stephy like yesterday’s issue of Daily Kos.

So what did Trump say about Putin and America at CPAC — and previously — that caused Stephy and the left to get their knickers in a wad? “The problem is not that Putin is smart,” Donald told the CPAC faithful: “The real problem is our leaders are dumb.” And then some.

As transcribed by C-SPAN:

Nobody could ever believe how bad and weak and grossly incompetent it has been. And when you have a weak president who is not respected by other nations, you have a very chaotic world — and the world hasn’t been this chaotic since World War 2. … I have no doubt that President Putin made his decision to ruthlessly attack Ukraine only after watching the pathetic withdrawal from Afghanistan.

Yesterday reporters asked me if I thought President Putin was smart. I said, ‘Of course, he’s smart,’ to which I was greeted with ‘Oh, that’s such a terrible thing to say.’ Yes, he’s smart. The NATO nations and indeed the world, as he looks over what’s happening strategically … they’re not so smart. They’re looking the opposite of smart.

The problem is not that Putin is smart — which of course he’s smart.The real problem is that our leaders are dumb. So dumb.

And here’s the kicker, classic Donald-style:

Under our [his administration] leadership the world was a peaceful place because America was strong and the perception of our country was perhaps like it had never been before. Powerful, cunning, and smart. We were a smart country. Now we are a stupid country. We always very simply put America first. That was the answer.

Hoo-boy. While the majority of Trump’s commentary s correct, “America is a stupid country”? Whether that was a somewhat veiled jab at voters who voted for Biden, Trump getting out over his skis, or purposely and literally said, you just don’t go there. Call me wrong and I’ll call you a Trump apologist extraordinaire. Respectfully, of course.

Not to beat it to death, but can you imagine being OK with Biden saying “America is a stupid country” under any circumstances?

As I have written more times than I can remember, I voted for Trump, twice, and I will vote for him again if he is the Republican candidate in 2024. That said, I have always called him out — and will continue to do so whenever I believe he is wrong. And “America is a stupid country” is one of those times.

The words of Tom Cotton and Donald Trump are irrefutably correct in the respect that any sane, rational, person who has paid a modicum of attention to the international and domestic destruction purposely caused by President Apple Sauce Brains(TM) Joe Biden over the last 15 months cannot come to a different conclusion.