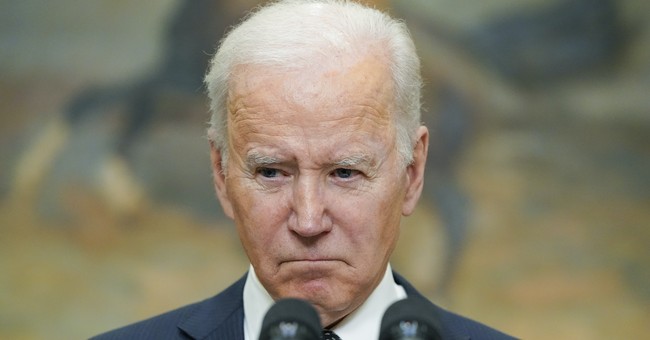 People used to talk about the narcissism of Barack Obama. But in a way, Joe Biden’s narcissism is far worse, because it’s unhinged from reality.

Biden just did a softball interview with progressive podcaster Brian Tyler Cohen. According to Biden, he hopes that his legacy will be “that I restored the soul of this country.”

First, that isn’t his job to “restore the soul of this country.” His job is to put America first and defend the nation. He’s failed miserably at that. It’s also insulting that he thinks that Americans were somehow so lacking without him. Imagine that he has such an over-inflated opinion about himself and his meager abilities.

Even as he has constantly lied, lashed out at anyone who may have dared to challenge him, falsely attacked Republicans as racists akin to Bull Connor, demonized the unvaccinated, he thinks he’s about bringing the “politics of America together.” Few people have been more divisive than him. “Reconstruct our alliances”? He’s made all our allies doubt us and our resilience, as he not only threw our allies under the bus in Afghanistan, leaving them and Americans at the hands of terrorists, he did that while leaving other allies in the dark about his actions. They spoke out against what he had done and their “sense of betrayal.” He’s failed so badly at virtually everything he’s done in just a short 13 months; he’s made Jimmy Carter look good by comparison and has gotten even worse numbers than Carter.

The scary thing is that Biden may honestly think he’s “restored” anything, despite it having no relation to fact-and Americans know it.

In a new Harvard CAPS-Harris poll, 59 percent of Americans blame his weakness for Vladimir Putin invading Ukraine, with 62 percent thinking it wouldn’t have happened under President Donald Trump. His approval is still in the toilet in that poll at 38 percent, with Americans unhappy at him across every dynamic, particularly over inflation and the economy. A new ABC News poll that just came out had that even lower – at 37 percent approval.

But Biden doesn’t care about that. We already reported on part of the interview, where Biden said he thinks that the bad polls show that Americans just have some kind of a “psychological issue” with being happy, even though “things have gotten so much better for them economically.”

Gas is almost $5 a gallon in some places, chicken is impossible to find in some places, and stores are selling frozen meat now because the supply chain is screwed, and nothing gets anywhere on time. People are being crushed by inflation. And this is before the sanctions on Russia that Joe promised would hurt us, as well, kicked in. But sure, you go with that, Joe.

He kept repeating the false story that a third of inflation is due to the price of automobiles. That isn’t even how you assess inflation.

Even in what was a puff piece interview designed to make Biden look the best that he possibly could, he still looked like he couldn’t muster up much energy. He was still showed his deficits. Regarding Russia, he said his “goal from the beginning” was to make sure he kept NATO all on the same page. His goal wasn’t to lead and respond. His goal was to do whatever Germany would allow him to do, which is why it took so long to get around to any real sanctions, not until after the invasion. As Ukrainian President Volodymyr Zelensky said, what kind of sense does waiting make? Yet they waited anyway and they got the invasion, showing the failure of weakness.

Even in a softball interview, Biden continued to show how completely out of touch he is on every issue.