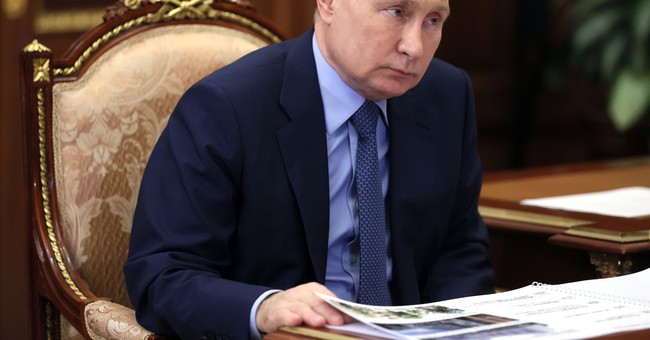 While Kyiv is still under attack and great threat, it’s still standing yet another day, and that’s bad news for Vladimir Putin’s ambitions.

As we noted on Saturday, Putin is reportedly furious. He thought he was going to walk in, Zelensky and the people would flee in panic, and then he’d install a puppet government. While he was right about Joe Biden and the EU being slow to the table on sanctions, the Ukrainian people’s resilience is what has turned the tide against him. Reports are that the Ukrainians have in just four days killed over 4,300 Russian troops. The losses are staggering, if the numbers are accurate.

Just to put that in perspective, in 20 years in Afghanistan, more than 2,400 Americans were killed.

Putin hadn’t even outfitted his soldiers with sufficient food or fuel to go more than a few days, according to reports. According to some of the soldiers, they didn’t even know they were coming to fight in Ukraine, and others are conscripts being forced to fight. Not the force you need to fight people like the Ukrainians, who are fighting for their country and their lives. Ukraine even managed an attack on a Russian airbase just over the border in Russia.

The losses and being stalled on his objectives already have forced Putin to offer “talks” in Minsk, which would have been in Belarus — basically on his territory, since Belarus has shown they are in his pocket, letting him launch attacks from there. Ukraine has countered with talks at the border, and the Ukrainian President Volodymyr Zelensky has said they will be meeting there, “without preconditions.”

Zelensky admitted he wasn’t thinking much would come out of it but he needed to take every shot at peace he could.

“I do not really believe in the outcome of this meeting, but let them try so that later not a single citizen of Ukraine has any doubt that I, as President, tried to stop the war, when there was even a small, but still a chance.”

It may have more of a shot than he thinks, if Putin is trying to think of a way out of the mess he’s made for himself. I’m not sure there’s a face-saving way out of it at this point. He’s put himself in a box, and that may be a dangerous thing if he thinks that he needs to show “strength” to get out of it. That may be the reason for the nuclear alert action that he took, as we reported earlier.

One of the reasons talks may be underway is that Putin was pushed by the Chinese President Xi to negotiate.

Xi said on the call with Putin that it is important to “abandon the Cold War mentality, attach importance to and respect the reasonable security concerns of all countries, and form a balanced, effective and sustainable European security mechanism through negotiations”.

China has been aligned with Russia on this, and hasn’t condemned their invasion of Ukraine, in part because they have their ambitions on Taiwan. They’ve been carefully watching everything – evaluating how everyone is reacting here – with that thought in mind.

They may have looked at the weakness of Joe Biden, and that was likely giving them lots of ideas. We saw China make threatening comments and send more warplanes over Taiwan. They even said Ukraine is the future of Taiwan.

But looking at how Ukraine has responded and how the world has come together from many corners to condemn Russia, China has to be rethinking that thought. They don’t want to be cut off and made a pariah like what is happening to Russia. So, it’s just possible Ukraine may not only save themselves but they may help save Taiwan in the bargain.