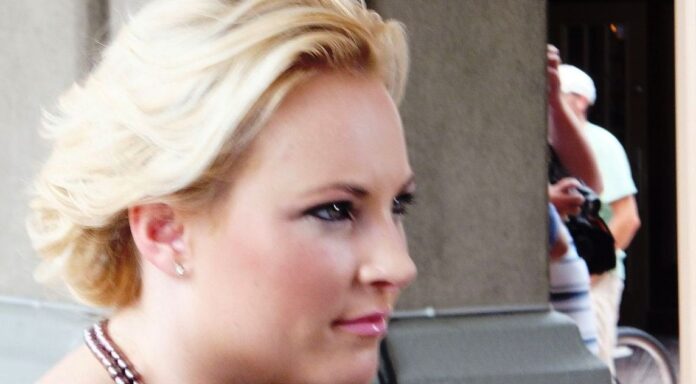 Meghan McCain, daughter of the late Sen. John McCain (R[INO]-AZ) and current host of ABC’s The View has once again thrust herself into the limelight by taking on the entire Republican party, saying that their dissent against GOP Conference Chair Liz Cheney (R-WY)’s opinion is dissent against herself and “college-educated” Republican women.

Wonder how McCain got from “Cheney disagrees with some other Republicans” to “you’re going to lose the next mid-term if you don’t let this woman stand up to the entire party”? We wondered as well, and let me tell you, it was a trip.

During Wednesday’s edition of “The View” McCain took aim at House Republicans for their audacity in considering replacing Cheney for her continued claims that former President Donald Trump’s claims of election fraud are unwarranted. The House Republican also voted in favor of impeaching the president following the Jan. 6 Capitol Hill riots that lead to multiple deaths and frightening suit-wearing lawmakers cowering under desks.

McCain, however, ramped up the discussion of dissent among the party she claims to align herself with, saying that Cheney is being targeted because she’s (you guessed it) a woman, and won’t stay in line with “Cheeto Jesus,” (also known as former President Donald Trump) and his talking points.

“What’s happening is — it’s very clear, and I’m going to be a little crass — they’re shoving her for her going on television multiple times and saying the election wasn’t stolen and for refusing to debase herself to Cheeto Jesus,” she said.

Just to be clear, that wasn’t McCain’s only crass comment, should you continue to watch this trainwreck of a supposed Republican’s diatribe against House leaders and continued use of the gender card, you’ll get to hear McCain talk about the “sausage fest” that she claims is running Capitol Hill, and almost pull a Hillary Clinton, claiming that this problem between lawmakers has something to do with who is college-educated and who isn’t.

This seems like a good time to hit the pause button and point out that while there is no shortage of politicians who claim to relate to the most destitute among us, a very small percentage of politicians in modern history don’t have a degree of some kind, most hold advanced degrees. Moving on.

McCain pushed the theory that Republicans are alienated moderate Republicans, especially women, and trading them for a future with Trump leading the party:

“I have spent the past five years of my life trying to accept, understand, and include the MAGA base of this party, and the message that’s being sent by the highest member[s] of Republicans in Congress is that women like me and Liz Cheney, who refuse to bend the knee to President Trump, but still remain loyal Republicans, we don’t have a place in this party. We are worthless; we are not worth fighting for to keep,” McCain said.

McCain posited the theory that instead of pushing out a member of their party from a leadership position when her public statements were inconsistent with the majority of the party, they should cower in fear of what the ever-expanding government would do under President Joe Biden, and find a way to tamp down concerns by Americans and their elected representatives, and pander to Cheney and “college-educated” women who she claims cannot get behind Trump and his claim.

(Also, she’s pretty sure this is all because Cheney is a woman and Trump is a man)

“I feel very defensive of Liz Cheney and, if you do this — which it looks like they’re going to do — I promise you there will be consequences. One way or another, there’s [sic] going to be consequences,” the co-host said. “So go ahead, go ahead in this sausage fest of MAGA up on Capitol Hill, pull her out and put another woman in who will do and say anything you want for President Trump: the election wasn’t stolen, he’s Jesus, it’s only Trumpism going forward.”

“See where this lands us in midterms,” McCain said. “I’m absolutely furious.”

.@MeghanMcCain: “The message that’s being sent by the highest member of Republicans in Congress is that women like me and Liz Cheney, who refuse to bend the knee to President Trump but still remain loyal Republicans — we don’t have a place in this party.” pic.twitter.com/9U8XqlaYUZ