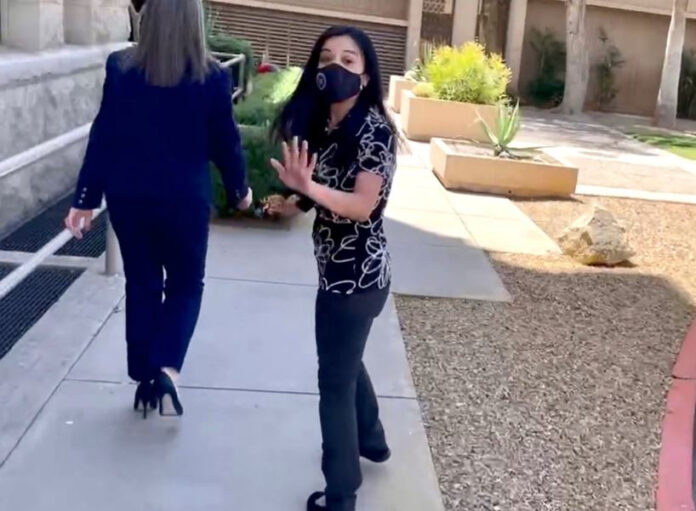 Our good friends over at the Gateway Pundit have confronted one of the biggest proponents for stopping the Arizona election audits. Far left Arizona Secretary of State Katie Hobbs has been at the head of the line in this regard. Now, she is finally being taken to task and we are all for it.

She gave a local news interview and Gateway Pundit got the chance to speak with her shortly thereafter. Ever since the Senate Audit of the Maricopa County ballots and voting machines began, Hobbs has been doing whatever she can to stop it from reaching completion.

Jordan Conradson is the Pundit member who was given the chance to confront Hobbs. When he tried to get to her, Hobbs’ assistant blocked him. To his credit, he was not willing to let this slide. He wanted the truth and he was not about to allow them to stand in the way of that.

“I was like f— it and ran after her,” he said. That sums it up pretty well, doesn’t it? Sometimes in this life, you simply have to go for broke and hope for the best. Once Jordan finally had the chance to speak with her, the fireworks began and they were awesome.

“Secretary Hobbs, why are you sending top Democrat operatives into Arizona audit and hiding it from the officials?… Why are you working so hard to shut the audit down?… What are you hiding?… Isn’t it your job to be nonpartisan?… You called this a Republican audit, this is an audit for the people… Secretary Hobbs, do you have any comments?” asked Conradson.

He peppered her with so many questions and we are here to applaud his courage. A lot of other conservative reporters would have allowed themselves to become discouraged. He did not. Hobbs literally sprints away from him and refuses to answer any of the questions that were being asked of her.

There’s no transparency here whatsoever. The Democrats are getting mad because they are not being allowed to run roughshod over the rest of the country anymore. If you think that we are exaggerating in any way, please be sure to check out the video for yourself.

Hobbs turns into a track star pretty quickly. Nothing screams “we are trying to stop all of you from being able to find the truth” quite like running in the opposite direction when simple questions are asked. It’s like they want people to think that they are guilty.

You would think that Hobbs would be ready with some fake answers, to at least provide the appearance of respectability. This is the complacency that starts to spread when a party gets really used to the idea of stealing an election. It emboldened the Democrats to the point where they believe that they do not even have to engage with conservatives anymore.

The Arizona audit is going to keep picking up steam, whether they want it to or not. There’s not much that can be done when the truth is this close to being revealed. Hobbs might be able to run for the moment but she is not going to be able to hide much longer. None of the Democrats will.

They are even trying to get the Department of Justice to intervene. Biden will do anything in his power to hold onto his ill gotten gains and this is something that we have all noticed. Even the liberals who are being honest with themselves would have to admit that this is a problem that has been brewing for quite some time now.

We cannot wait until Hobbs is finally confronted again. You know it is going to happen, especially since all of the conservative outlets are well aware of her reticence to speak. Maybe she should keep some track shoes in her purse just in case? We would hate for her to trip and fall during her next sprint!