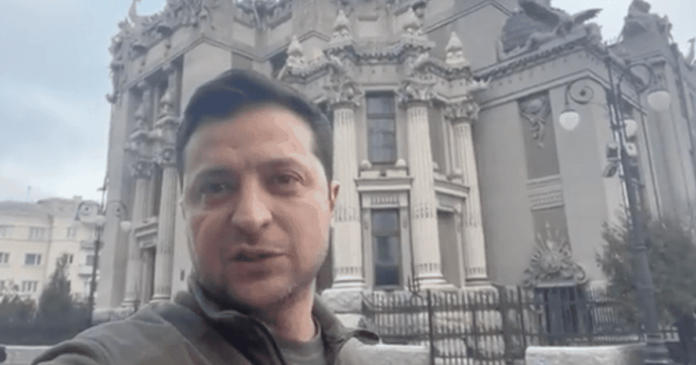 We anticipated the main attack on Kyiv on Friday night and the likelihood that it might fall.

But it’s day three, and the Ukrainians are still hanging in there, giving Putin far more difficulty than he ever expected, with Russians reportedlytaking heavy losses. Kyiv is still standing.

According to the British Defence Ministry, Reuters reports, they’re under fire but haven’t fallen yet.

“Russian forces have continued their advance on Kyiv with the bulk of their forces now 30 km from the centre of the city,” the defence ministry said in an intelligence update posted on Twitter.

“Russia has yet to gain control of the airspace over Ukraine greatly reducing the effectiveness of the Russian Air Force. Russian casualties are likely to be heavy and greater than anticipated or acknowledged by the Kremlin,” it said.

Kyiv remains under Ukrainian control, as Ukraine President Volodymyr Zelensky refuses to leave his country on the third day of Russia’s invasion. Zelensky has been posting videos from Kyiv, letting his citizens and the world know that he’s still there and standing up for his people. He’s refused the offer from the U.S. to get him out of here and instead has asked for ammo to help him fight.

There have also been conflicting reports about Turkey shutting off the Black Sea, a critical move and something that would severely hurt Russia if true. Zelensky is thanking Turkey for it.

Turkey, although close to Russia, has been very supportive of Ukraine, and is now calling for a ceasefire. One of the ships that Russia hit in the Black Sea was a Turkish warship, so Turkey can’t be happy about what is happening from Russia. Turkey is a NATO nation.

According to intel from Riho Terras, a member of the EU Parliament and a former defense minister for Estonia, Putin is furious that it hasn’t gone as quickly or as well as he thought it would.

Terras said the plan was to sow panic among the citizenry, so they and Zelensky would flee, and then Russia would try to install a puppet government which the panicked citizens will agree to. That doesn’t sound like, if this is true, that Putin has sized the Ukrainians up right — most appear willing to fight to the death and Zelensky is staying put. So, this seems to be a very poorly thought-out plan.

Now, there are even reports that Ukraine is not only defending itself but hitting back at the Russians, in Russia, hitting an airbase in Rostov. That’s stunning, if true, and the reporter from Kyiv Independent is calling it “confirmed.”

Meanwhile, Putin is still facing a lot of protests at home, with thousands still coming out in the streets against the invasion, and a lot of anger from around the world.

If Ukraine can hold out, it might be the most amazing feat against far greater numbers, and a testament to the strength of will and resistance.

Warning for graphic (but appropriate) language: