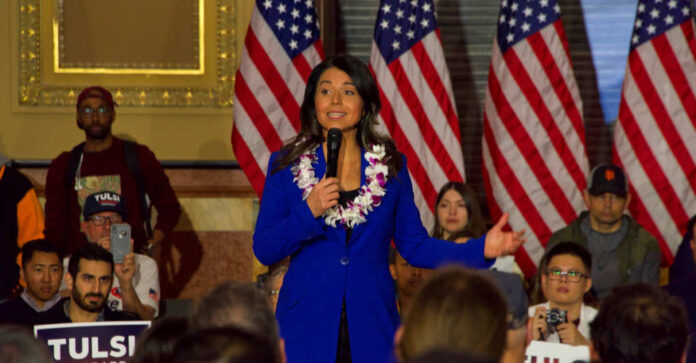 Tulsi Gabbard has become DINO-mite in her ability to speak out against Joe Biden. Although she is still a registered Democrat, she’s becoming louder and louder in her critique of what the party is doing.

Gabbard, who was once a Democratic presidential candidate, is showing that she’s a DINO (Democrat In Name Only). And, we’re here for it.

She voted for Joe Biden…not that there was anyone else that she could have voted for as a Democrat. Remember, he kind of fell into the Democratic nomination since everyone else backed out before the primaries.

It was either Biden or Trump, and, well, Biden seemed to be the most secure vote…at least for a Democrat, DINO or not.

Since Biden took office, though, he hasn’t done anything to help America. In fact, he’s made a lot of bad decisions – and America is struggling to hold itself together under his leadership. There’s a lot to say about Biden, and none of it is good.

Gabbard has been particularly outspoken about Biden’s inability to lead. “Sadly, not only has he failed to [end the divisiveness]; he has betrayed us all by pouring fuel on the fires of divisiveness that are tearing our country apart. Gabbard has put the president on blast because he has compared anyone who dares to dissent as “racist traitors.”

As a result of how Gabbard feels about Biden and the rest of the liberal administration, the former Representative of Hawaii has actually chosen to speak at the Conservative Political Action Conference (CPAC). The annual conference will be held in sunny Orlando, Florida, and she’ll be one of the featured speakers, which has been announced by Matt Schlapp, the American Conservative Union Chair.

Gabbard wants to work to make sure that the country is able to heal. Biden promised unity – and the only thing he has done is cause a great divide from coast to coast. People are pitted against one another in countless political topics.

The former presidential candidate was also quick to point out how Biden has managed to sick his attorney general on millions of people to identify them as “domestic terrorists” simply because they disagree with various issues. She is working to make sure that Americans do not allow this sort of behavior from the Biden administration.

It’s hard to believe that a Democrat is saying this. However, in the past year, Gabbard has been extremely critical of things being pushed by the Democratic Party. She is a veteran, and her desire to hold onto the most sacred values of the United States is being seen more and more as she takes to podiums across the U.S.

Gabbard has proven that she’s not just a social media warrior, hiding behind a computer screen. She’s willing to go in front of crowds to criticize Biden and call for people to speak up. We cannot simply allow ourselves to be labeled as domestic terrorists because we disagree with a tyrannical government.

Who knew that Tulsi Gabbard was the voice that we all needed to hear?

While we have become disgraced by RINOs such as Liz Cheney, we are rewarded by having a DINO on our side.

Gabbard is prepared to tackle every major issue from her party, including the left’s attempt to silence Joe Rogan. Her comment on the issue was “Zealots of wokeism try to censor voices who don’t agree with theirs because they fear the absurdity and weakness of their positions will be exposed.”

She doesn’t seem to be afraid of making waves – and we can’t wait to hear what else she has to say about Biden and the rest of the liberals on Capitol Hill during the CPAC.