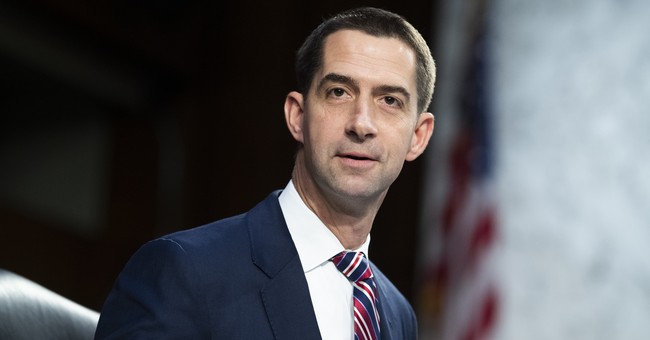 If anyone with a modicum of knowledge of the troublesome, kabuki-dance relationship between Russian strongman Vladimir Putin and President Apple Sauce Brains Joe Biden was shocked or angered by Biden’s refusal to discuss personal sanctions on Putin for his brutal invasion of Ukraine, that’s on them.

As a friend recently observed, Biden is little more than a milquetoast Walter Mitty. But worse.

In stark contrast stands a true American patriot, Arkansas Republican Sen. Tom Cotton, an intelligent, common-sense guy and rational thinker, who on Thursday said the most effective action Biden could take — at this too-late point to do anything else — is to sanction the hell out of the Russian energy sector, while simultaneous lifting restrictions on energy production in the United States, thus providing relief to untold millions of Americans. Prediction: Apple Sauce Brains(TM) will do none of the kind. But let’s move on.

Our sanctions are not designed to cause any disruption to the current flow of energy from Russia to the world.

That is profound in its ignorance and obfuscation.

How much of a damn has Biden cared about the current flow of energy — and its associated cost — in America since Day One of his Oval Office Occupation? He immediately bowed to radical environmental lunatics and not only stuck a fork in Keystone XL; he has continued to kill every pipeline domestic energy project he and his delusional U.S. Special Presidential Envoy for Climate [ROFL emoji: ten of them] John Kerry (about whom I’ll have “special” comments in a minute) can get away with.

Cotton told Fox News host Laura Ingraham what should be obvious to rational, semi-intelligent people: The United States should not be buying oil and gas from Vladimir Putin’s Russia — particularly not at this catastrophic and moral-less time — under any circumstances.

But? Team Biden “is admitting they don’t want to impose oil and gas sanctions on Russia because they’re afraid it’s going to add to the inflation they’ve already created, Cotton correctly observed. As transcribed by CNS:

Well, how about we impose those sanctions, but we lift all those restrictions on the production of American oil and gas so we can start drilling on federal lands again and putting out new leases and reopen the Keystone pipeline, which would bring more oil into America every day from Canada than we import every day from Russia. That’s what we should be doing.

Should be and will be are whole different ballgames with Joe Biden and his equally-feckless clown car of advisors in power, Senator.

And, Mr. Heinz-Kerry? Our intrepid “existential threat to mankind” expert? Far from boosting America’s supply of oil and gas, this lunatic has his “global warming” panties in a wad over the “massive emissions consequences” stemming from Vladimir Putin’s war atrocities against the Ukrainian people.

Kerry obscenely said he fears the war will divert (presumed) attention away from “climate change.” “So, I hope President Putin will help us to stay on track with respect to what we need to do for the climate,” Kerry ridiculously said on Wednesday. Yeah, I got nothin’.

“Those are the rantings of a deluded ideologue,” Cotton said. Um, I would have been far more — and accurately — “descriptive,” Sen. Cotton.

Most Americans are not ideological about these matters. They’re clear-eyed, they’re sober, and they understand that you should not disarm your own energy production when a brutal dictator uses energy as a weapon against our partners — and then invades an innocent nation and creates some of those scenes that you played earlier of children screaming and families scrambling into subway stations.

“Most Americans understand,” Cotton reiterated, “it’s basic common sense that we want to be able to protect our own energy supply, and hopefully supply Europe the energy it needs to get off of Russian energy.”

It’s one thing to be a feckless, inept individual. But quite another when that individual is the president of the United States, whose every move is decided by far-left ideologues who care far less about life, liberty, and the pursuit of happiness in a free and vibrant America — and far more about radical-leftist ideology.

That, RedStaters, is what you see on a daily basis.