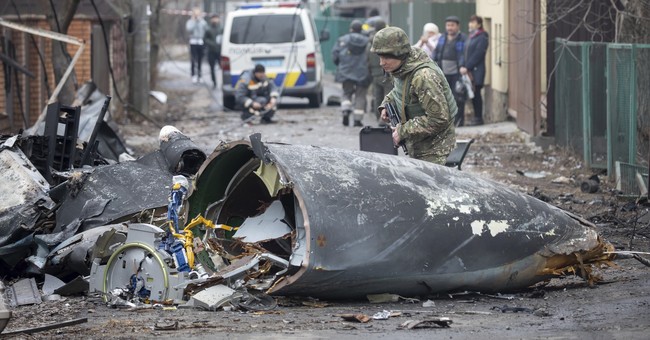 Fox News is now reporting that the Russians are moving in on the city of Kyiv.

Ukrainian President Volodymyr Zelensky said in an evening speech that a lot of cities were under attack, although reportedly, none have fallen yet.

The Ukrainians have put up a brave fight, taking out a lot of Russians and their equipment in the process. While it’s difficult to confirm the numbers and they may be exaggerated, it’s clear that the Russians suffered more casualties than they had hoped on the first day. If even half of it is true, the Russians are getting a drubbing and facing much more resistance than they thought.

As we previously reported, it sounds like Vladimir Putin is getting desperate with his latest remarks, calling on the Ukrainian military to join him because the leaders are “Neo-Nazis and drug addicts.” That’s not happening anytime soon.

Fox contributor Gen. Jack Keane said Putin has chosen the most difficult plan (meaning moving in from multiple directions in the country), and “he’s struggling with it.”

There are even persistent, although unconfirmed, reports that some of the Russian units are out of food, and are asking for food or taking it, suggesting they may be spread too thin.

Not good for public opinion: there’s the possible war crime of bombing a kindergarten.

But maybe the most problematic of all for world opinion is that they have attacked the ships of nations other than Ukraine in the Black Sea — they hit a Japanese ship and a ship from Moldova. They may be attacking them to prevent food from getting into Ukraine, in the hope they can cut off food to the population.

Among those attacked were ships from NATO countries — one Turkish ship and one Romanian the day before. Needless to say, this is not good. This could draw NATO into it, if this doesn’t stop.

While things haven’t been going well for Putin and he appears to have bitten off more than he can chew at the same time, he does have more Russians ready to come in, as well as Chechens. Putin’s calculation there is that if Chechens are killed in the fight, that Russians will be less upset with him than if Russians are killed.

But now, there’s word that Putin may want to ‘talk,’ and that he’s calling for a meeting in Minsk.

Putin said he was ready for talks, after he held a call with Chinese leader Xi Jinping, the New York Times reported.

It may be that he realizes he bit off too much and is looking to buy a way out of it. Or that he’s just trying to buy time. Zelensky had previously said he would be willing to talk, so we’ll have to see how things evolve.