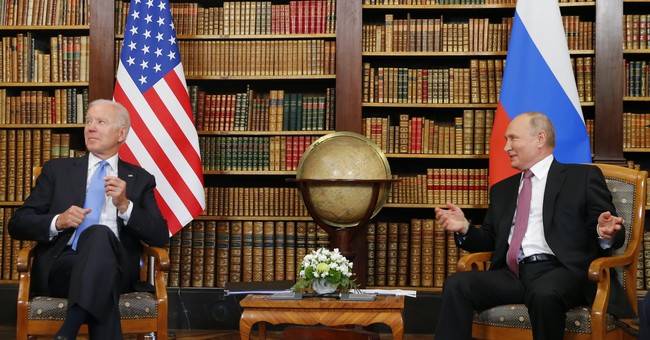 Here we are in the year 2022, and the United States of America is being led by Joe Biden.

Back in the day, the leader of the United States was considered the “Leader of the Free World,” but nowadays it means something not as awe-inspiring and that is truly a shame. This country, in the just-under-250-years since its founding, has done more for the advancement of the human race and the cause of freedom than any nation since the Earth cooled.

Yet, here we are now, being led by a smarmy-mouthed not-so-tough guy, Scranton Joe Biden. This is embarrassing for America but now that the world will also suffer from this and for that, I am deeply sorry. So sorry, in fact, that I have decided to cancel my trip to Italy, much like Joy Behar, out of said embarrassment. She, of course, is just scared that her favorite dessert from Italy, Tiramisu, might not be readily available because of a war.

I have hesitated on commenting about the Russian incursion invasion of Ukraine because I have not fully been able to wrap my feeble mind around what has happened in the past 18 months here. Back in June of 2020, we were dealing with the COVID thingy and still thought dirty socks wrapped around your face kept the most deadly virus ever created from killing you. We had Orange Guy at the helm for over 3 1/2 years, and we were told that war was right around the corner with nearly everyone, yet it never happened.

Now, just 13 months after the most qualified person EVER to hold the esteemed title of President of the United States ASSumed the office, we get the largest land invasion in Europe since World War II. If you don’t recall the stellar analysis of the guy who at the time was running for POTUS, here you go.

The only thing I’m wondering about that tweet is why the person who wrote it on Joe’s behalf, hit send.

Even though the war has come to Ukraine and not by their choice, they seem to have more backbone than Vlad and his comrades in the Kremlin have anticipated. From my colleague Nick Arama… Report: Russia Fails to Reach Objectives for First Day Amid Brave Ukrainian Defense

The Russian invasion of Ukraine isn’t going as easily as I think Vladimir Putin thought it would go.

As we noted earlier, they are facing some tough fighting from the Ukrainians as well as thousands of protesters in Russia who have come out against the war. That’s quite something, given the oppressive state of Russia and how they would face immediate retribution. Yet, protesters have come out anyway.

Ukraine fought back to recapture an airport the Russians had taken. So, Russia isn’t going to be able to do what they wanted because they haven’t met the goals they were trying to meet by now – which was to seize all the airports.

So now that Putin has stood toe to toe with good ole Joe and the sanctions that the White House announced yesterday are landing with the thud of a Kamala Harris punchline with a cackle afterward (The White House Appears to Wave the White Flag on Russian Sanctions), what happens next?

The United States under Biden will struggle to keep its coalition together for sanctions on Russia because no one fears Joe. They pretend to respect him but most of these people on the world stage have known about Joe’s bumbling and stumbling for years. They actually knew him when he was in his prime as a Senator or Veep, and that was not much better than the broken down 2.0 version we see today as President.

All the world leaders have gone toe to toe with Biden and they know there is nothing to fear. He is capable of filling a balloon with hot air but not much else, and that is bad for this country and the free world.

They may all have hated Trump, but they sure as hell feared what he might do with sanctions or worse. This is most likely why Putin did not push this invasion issue while President Mean Tweets was at 1600 Pennsylvania Avenue.

Mentioning POTUS 45, maybe you recall when Scranton Joe did one of his puff-his-chest-out routines and acted like the tough guy he never was and told a story about how when he was a “pretty damn good athlete,” he would have kicked Trump’s butt in high school.

Joe couldn’t kick athlete’s foot any more than he could someone’s butt behind a gym or anywhere else. However, maybe that is the way out of this mess: Have Biden challenge Putin to a contest behind a gym to settle this whole invasion debacle.

Maybe if we made it a pay-per-view event, we could raise enough money to cure cancer.

That or pay off Hunter Biden’s paternity woes.