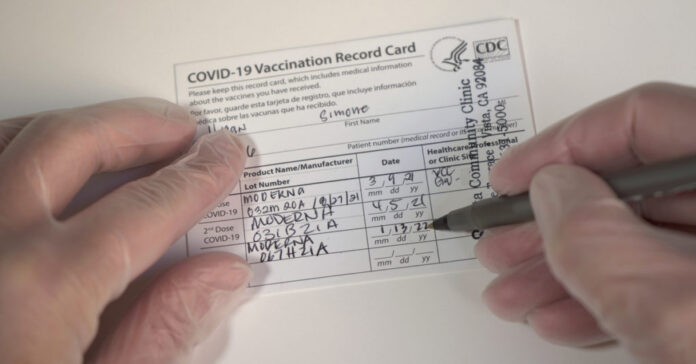 Life these days is one startling revelation after another. Some discoveries are of the “Gee, I didn’t know that” variety while others allow us to toss a few “I told you so’s” in the faces of those who doubted our predictions. The latter of the two is about to have a field day unless the CDC gets on the stick and coughs up the data it appears to be hiding. For as yet undetermined reasons, they don’t want anyone to know about the boosters’ effectiveness in the 18 to 49-year-old demographic.

The scientific community is angered by the Center for Disease Control and Prevention’s release of only partial information. Led by Dr. Rochelle Walensky, the CDC boasted the vaccine’s effectiveness in every age group but the one in reference.

The obvious contention is that the CDC believes that whatever information they have may be perceived as running contrary to the effectiveness of the booster. Knowing it’s of little to no value to any particular age group could very well have a negative impact on all demographics. This being the motive, secrecy has become the better option. But how could anyone have thought the omission wouldn’t be noticed and that it wouldn’t have led to intense scrutiny?

The CDC further omitted data on child hospitalizations. In an answer that revealed nothing, spokeswoman for the agency Kristen Nordlund said they had withheld certain streams of information “because basically, at the end of the day, it’s not yet ready for prime time.” Announcing a reduction in cases or the ineffectiveness of the booster might kill the vibe they’ve worked so hard to create.

The 18 to 49-year-old demographic has the lowest death rate from COVID-19 of all others. Even without the so-called added protection of a booster, they are the least likely age group to get sick as compared to the elderly and the immunocompromised who do take the booster.

Not enough data has yet been compiled for measuring the boosters’ effectiveness in children ages 12 and up since this was just approved last month.

Belligerent, and with good reason, scientists have told the CDC that it’s impossible for them to properly educate the public when they refuse to even educate them. Of course, the scientists would like nothing better than to see every vaccinated person in the U.S. get the booster, but they also have an obligation to not withhold the truth, or tit-for-tat, not to lie.

Vaccine expert Dr. Paul Offit who works as an advisor to the Food and Drug Administration is at his wit’s end. “Tell the truth, present the data,” he said. “I have to believe that there is a way to explain these things so people can understand it.” Unlike the CDC, Dr. Offit understands that not everyone outside of the scientific community is a drooling moron. Some, maybe…

Here’s the frosting. Offit said that because the CDC refused to release the data, scientists in the U.S. are being forced to use Israeli data that they can only hope is accurate.

Chair of the American Academy of Pediatric’s Committee in Infectious Diseases, Dr. Yvonne Maldonado, has repeatedly requested data from the CDC concerning children with other existing medical conditions who are hospitalized for COVID.

She finally got the information she’d been seeking for so long but it didn’t come from the CDC. It came from a report in the New York Times.

“I mean, you can’t find out anything from them,” she said. The report in the NYTs indicated that the CDC had been sitting on the information Maldonado had requested for over a year. “They’ve known this for over a year and a half, right, and they haven’t told us.”

Donald Trump held the CDC at arm’s length, sometimes listening and other times questioning their wisdom, or their lack thereof. Biden has yet to figure out which building they’re located in but one fact is certain, what the CDC is doing is unconstitutional.

As a government health organization funded by American taxpayers, it has a duty to tell the truth, the whole truth, and nothing but the truth. Anything less should not be tolerated. But yet, it is.

Should you get a booster or shouldn’t you? It’s not our job to tell you. Just know that the CDC has some information they aren’t letting go of and everything you just read here is based on our speculation and the similar speculations of others.

This article is not to imply that the CDC doesn’t have a totally different reason for keeping data about the 18-49 demographic on the low, but if they do, it certainly cannot be good.

If you’ve already been boosted and you fall within this age group you’re advised to seek medical attention at the first sign of unwanted tail growth.