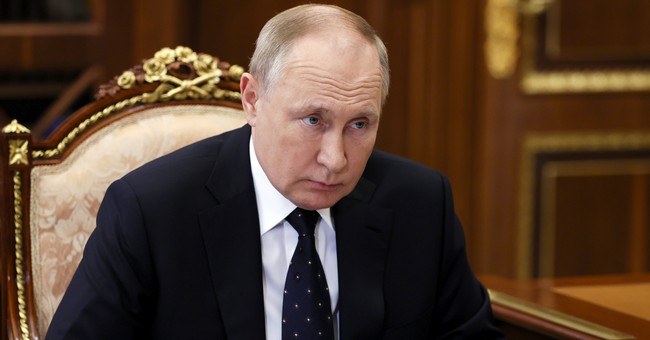 Joe Biden’s reaction to Vladimir Putin’s actions against Ukraine has so far been pathetically weak. He hasn’t thrown down any of the more significant sanctions that might hurt Putin or the people closest to him. He’s still holding back. Biden just contradicted his entire team. He can’t even seem to get on the same page with them, and he has no grasp on reality when it comes to the sanctions or their effect. He said that no one thought sanctions would prevent Putin’s actions. Yet that was all his team was pitching, that the threat of Biden’s terrifying sanctions would deter Putin.

How’d that work out? Biden is still not willing to pull the trigger on moves that might have an effect, while claiming to Fox’s Peter Doocy that what he has done will be as effective as the “bullets” Russia is using against Ukraine. It’s madness.

The Ukrainians are tough people, and they’re not done in quite yet. Even if, ultimately, they are overwhelmed, Putin is still going to have to deal with a very hostile populace, and that has been the graveyard for many who have invaded the country. That isn’t going to go well for him.

Right now where Putin is facing a lot of resistance — in addition to the Ukrainians — is in his own country. Russians are not happy that they have been dragged into this by Putin’s land grab. They are out, in cities across the country, protesting by the thousands.

Now, we’ll have to see how strong that resistance is, and how much of an impact that might have on Putin. More than 1,000 people have already been arrested, according to reports. Putin is not known for letting dissent stop him. He tends instead to just lock up or kill the dissenters. But, if this is as widespread as this appears, it may have more of an effect than Joe Biden’s piddling sanctions.

But, this is where some crazy liberals were.

Still using even the mistreatment of Russian protesters to attack Canadian protesters. No, they both have a right to protest. But even now, they’re so invested in the liberal agenda, they can’t see that both have the right to be free of assault from their governments. Which shows they have no understanding or care about principles of individual rights and freedom.

They still don’t get the reason for all this action from Putin is Biden’s weakness and their liberal Democrats. That’s how you have posts like this from folks like Alexander Vindman, who doesn’t understand that he helped get us to this place that has emboldened Putin.