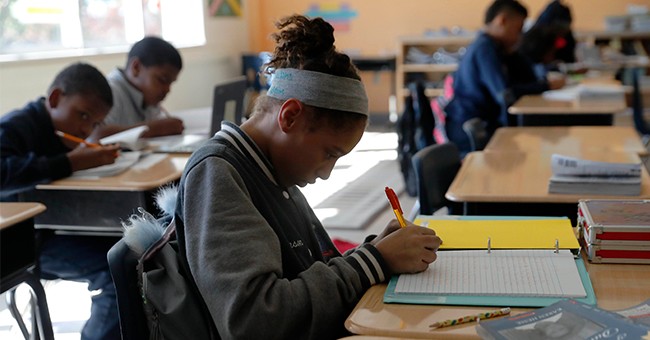 News that teachers union president Randi Weingarten did everything she could to pivot away from talking about critical race theory and its increasing adoption in public schools (covered here by RedState’s own Kira Davis) comes into sharper focus when considering this must-read piece by Josh Kraushaar in National Journal detailing a new poll showing that very few parents are comfortable with this new, radical curriculum shift in their children’s schools.

A new poll conducted by Republican polling firm Competitive Edge Research and given exclusively to National Journal shows that while parents broadly support the ideas of inclusion and diversity as part of school curriculum, they veer sharply right and form more of a consensus against the notion of teaching children that their race is one of the most important defining characteristics about themselves.

One of the few polls to examine the level of support…suggests the backlash to this type of educational activism is bipartisan. Commissioned by a newly launched group called Parents Defending Education, formed to “fight indoctrination in the classroom,” the survey found there is deep and widespread opposition to equity programs that call on students to check their “white privilege,” teach them that America is a systemically racist country, and promote social-justice causes.

The survey, conducted last month…found broad support for generic calls for diversity and inclusion. Nearly two-thirds of respondents said it was at least somewhat important to “promote social equity” in school. But when drilling in on details, the political tide turned. A sizable 55 percent of respondents said placing a “greater emphasis on race and gender” was not important to them, including about one-third of Democrats. A whopping 70 percent majority rejected the notion that schools should “teach their students that their race was the most important thing about them.”

Respondents also balked at history classes focusing “on race and power and promot[ing] social justice” with 59 percent of respondents rejecting that curriculum shift, and 50 percent strongly opposed. “A whopping 75 percent of adults surveyed said teachers should not ‘teach students that there is no such thing as biological sex, only gender preference’,” Kruashaar writes. Another 51 percent of those polled on the question of whether schools “should hire diversity, equity, and inclusion consultants or administrators to train teachers” were opposed to those types of hiring practices.

The National Journal piece discusses this poll primarily in terms of how this kind of bipartisan opposition to critical race theory might affect political races like the ones brewing in newly-blue parts of Virginia. But there are larger implications for national politics as well, and Weingarten’s stumbling change-of-subject interview is indicative of what’s happening with unions as their numbers decline.

While the Pew poll acknowledges union membership drops are viewed differently by Democrats and Republicans, the drop itself could indicate the policies and politicians unions have historically promoted are increasingly out of touch with the desires of average Americans, which could force a shift in union positions if they want to survive. Look no further than Amazon employees in Alabama voting overwhelmingly against joining the Retail, Wholesale, and Department Store Union.