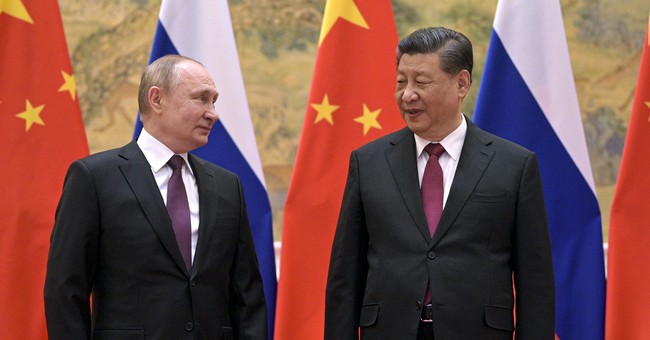 I said earlier on Thursday that the failure of Joe Biden to take any concrete action regarding Vladimir Putin was going to have a ripple effect, not just for Putin’s ambitions (that don’t end with Ukraine) but with China likely next on the list to try to grab what they can while the rest of the world is distracted. Biden’s fecklessness has all the bad actors on the move.

China looked like they were trying to test that on Thursday, as nine Chinese aircraft just entered Taiwan’s air defense zone and Taiwan had to scramble their fighters to respond. They’re scoping out the defenses.

A small fleet of eight J-16 fighters and a Yun-8 technical reconnaissance aircraft breached the air space. The Taiwanese aircrafts broadcast a warning and monitored the Chinese fleet’s activities. [….]

A Defense Department spokesman said that the Pentagon is “aware of the reporting” and that the U.S. remains “concerned” by “provocative military action near Taiwan.”

“The United States will continue to support a peaceful resolution of cross-strait issues, consistent with the wishes and best interests of the people on Taiwan,” the spokesman said, stressing that such action is “destabilizing” and undermines regional peace and stability. “Our commitment to Taiwan is rock-solid and contributes to the maintenance of peace and stability across the Taiwan Strait and within the region.”

Another sign was how they reacted to the invasion of Ukraine.

We reported how Chinese media accidentally revealed that they weren’t going to be taking a hard line or criticizing Putin’s further invasion of Ukraine because they have desires on Taiwan and they want Russia to show them the same response there.

Here they are objecting to even calling it an “invasion.”

China is watching how the U.S. responded on Afghanistan and now to Putin, and now they are gauging their chances, just as Putin did.

“They have done the calculus as to what this would ‘cost them’ if they were to move against Taiwan. And they are getting more data points now looking at what the West is doing now vis-a-vis Russia,” said Heino Klinck, the former deputy assistant secretary of defense for East Asia during the Trump administration.

“It will inform and potentially shape Chinese decision-making,” he continued in reference to the U.S. response in Eastern Europe. “Any sign of weakness…will be taken into account by the Chinese.”

While we had an agreement with Ukraine to help them in their defense if they gave up their weapons – and Barack Obama was involved in helping get rid of their weapons – it does not obligate us to necessarily have troops on the ground. China is now probably trying to assess what Biden is willing to do on behalf of Taiwan.

When people commented on China’s action, this is what one of their state media guys said.

Their CCTV is now saying Ukraine’s fate is the fate of Taiwan.

The bad actors think they can get away with anything with Biden in charge, and where is the U.S. response to this? Weak sanctions that will not affect the bad actors. More will be coming.