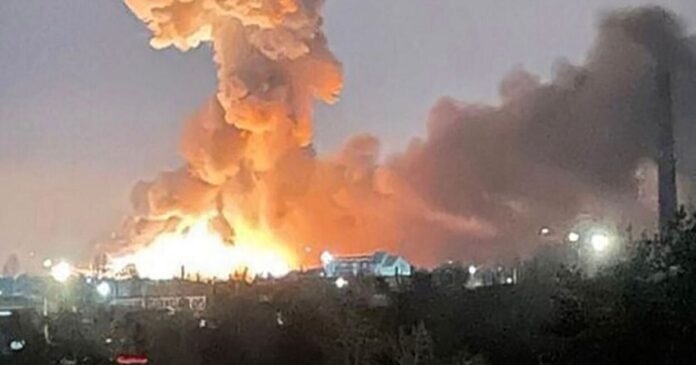 And so it has happened. Not as much “shock and awe,” as the commencement of a foregone conclusion. Russian dictator Vladimir Putin has launched a full-scale attack on the former Ukrainian “Socialist Republic” that all the world knew was inevitable. Except for hapless Joe Biden, of course — until it was too late.

To paraphrase FDR’s “a date which will live in infamy” quote following Japan’s attack on Pearl Harbor, “Just the News” CEO and Editor in Chief John Solomon declared the invasion plunging Ukraine into bloodshed “a moment of infamy” for the self-neutered president of the United States, AKA: “Leader of the Free World.”

As Solomon observed, “each American president is judged by his command in moments of crisis.”

For Lincoln, it was the address at Gettysburg. Roosevelt made his mark after Pearl Harbor. Kennedy endured the Cuban missile crisis. And George W. Bush rallied a stunned nation from a smoldering pile at Ground Zero.

While much history remains to be written for Joe Biden’s presidency, the start of Russia’s military aggression against Ukraine may be defined years from now by extraordinary moments of infamy.

In his final, hollow speech on Tuesday, in which he all but begged Putin not to invade Ukraine, Barney Biden(TM) took U.S. military action off the table by offering a hollow pledge “so detached from geopolitical reality,” Solomon observed, but “shook the confidence of allies” and “stunned some in the diplomatic world.”

We have no intention of fighting Russia. We want to send an unmistakable message, though, that the United States, together with our allies, will defend every inch of NATO territory and abide by the commitments we made to NATO.

In other words, given that Ukraine is not part of NATO, our feckless president in effect greenlighted Russia’s invasion. Remind you of anything? As we reported in June 2021, Biden claimed he gave Putin a list of 16 “infrastructure things” that were “off-limits” to future Russian cyberattacks.

Translation, as no doubt interpreted by Putin: “Yo, Vlad. Feel free to attack anything not on this list.”

And who can forget Biden all but greenlighting “minor incursions” by Russia into Ukraine, as we reported in January? Don’t misunderstand: I’m not suggesting the United States should now declare war on Russia, but continually greenlighting the world’s bad actors never works out well.

Ample historical evidence exists, from British Prime Minister Neville Chamberlain’s ridiculous “peace in our time” observation prior to Hitler plunging the globe into WW II, to Barack “Red Line” Obama’s hollow threat to Syrian dictator Bashar al-Assad about the use of chemical weapons on Syrian men, women, and children, to Biden’s threats of sanctions that never came prior to Putin’s full-scale attack on Ukraine.

Solomon further noted that while Biden’s handling of the Russia-Ukraine crisis has drawn wide condemnation — as has been the case with every purposely-created Biden Crisis(TM)– early in his presidency he revoked permission for the Keystone pipeline in America, while at the same time giving Putin a long-sought, U.S. blessing for Russia’s Nord Stream II natural gas pipeline in Europe.

“That move,” said Solomon, “changed the geopolitical equation for Russia, whose economy is one-dimensional, dependent on energy exports,” adding: “American and Western counterparts were made more reliant on Russian energy, and Putin’s often-stretched treasury fattened with rising oil prices.”

And here we find ourselves. As gas prices surged out of control while the Biden Energy Crisis(TM) raged on, our feckless president begged Russia and OPEC to increase oil production.

And how’d that all turn out? Rhetorical question. Just like everything else Joe Biden touches.

Meanwhile, the horror continues in Ukraine. And as is generally the case in indiscriminate warfare, civilian casualties are among the most horrific of all.

If you’re “of the persuasion,” please offer up a prayer or two for the people of Ukraine.