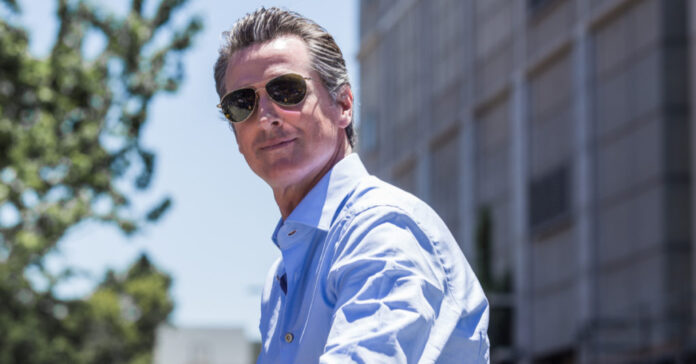 The Democratic Party thrives on creating fear and engaging in theatricals, all for drama. These pathetic people cannot work with others without creating a scene before the world. And as a result, they act like they know what they are doing, but it is evident to everyone that they have no clue what is going on.

Gavin Newsom is the worst of them. He loves to create a moment of drama to push off his authoritarian agenda. His latest attempt to make a name for his slick-headed life comes as a response to many of the new abortion laws coming out. He acts like the matter of gun control is of more importance.

Newsom got word that a firearm company was making a new gun that was supposed to be marketed towards kids. The nasty Democrat lives under the assumption that kids do not know anything about weapons. But many grow up around guns and certainly know more than the governor does.

The gun that is produced looks like an AR-15. In real life, the gun is a .22 caliber rifle. Gavin Newsom thinks the company is making high-profile weapons that youth will play around with and shoot their eyes out with. He is appealing to parents hoping that they will riot and force the company into bankruptcy or force them to comply with liberal lockdowns.

Newsom used his Twitter account to state, “This is VILE. A skull & crossbones with a pacifier on weapon of war. Made to look ‘cute’ to appeal to kids. The manufacturer calls this a ‘JR-15.’ Every NRA-backed politician should condemn this.”

The new gun aims to introduce kids to the concept of guns and help them learn how to operate them safely. These kids know more about guns than Newsom could ever know. They are trained to use guns from an early age and learn to respect them.

The gun manufacturer is Wee1 Tactical. They stated that “Our goal from day one was to develop a shooting platform that was not only sized correctly, and safe, but also looks, feels, and operates just like Mom and Dad’s gun. Safety was so much at the forefront of our thought process that we developed and patented a tamper-resistant safety that puts the adult in control of the firearms safety switch. The developers of the Wee1 Tactical JR-15 have been in the firearms market for over 40 years. Schmid Tool has been providing firearms components to our customers in the AR-15 market specifically for more the 30 years. We are so excited to start capturing the imagination of the next generation to enter the shooting sports.”

Gavin Newsom wants people to think that they are targeting kids hoping that they will use the guns ignorantly and kill themselves. He wants people to think that he cares about saving their lives by banning guns from being used as educational tools. And all of this is coming from a man facing reelection battles who is a full supporter of murdering children before they are born.

The manufacturer has developed the gun to be used in connection with a teacher. The kids will learn from a gun expert all the safety and details they need to know about the gun. They will not have to worry about not being able to use the weapons safely.

Gavin Newsom does not know very much about guns. The concept is clear regarding the weapon itself. The gun was made to help teach kids how to use them safely. And for Gavin Newsom to target this particular weapon is nothing more than a dramatic stunt to drum up support for his reelection campaign.

He wants people to think that he cares about kids, but the truth is he could care less since he supports the murder of the unborn. He is more concerned about winning the next election than making sure that young people have the right to be born and live a life as productive American citizens.