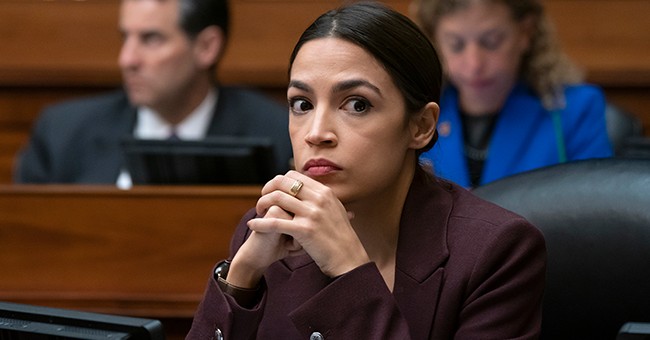 Just when you think that the world is falling apart and there is no hope, progressive heroine Alexandria Ocasio-Cortez, or as she is known by superhero nickname, AOC, once again shows up to save the day.

Thank the Lord for her.

Seems that being the face of “The Squad” and advocating for progressive policies that are currently wrecking the country is draining her of that much-needed vitality to continue to be a force in the nation’s capital. I don’t know about you but we can’t have this happen to a national treasure such as her.

I know that you might be wondering how stressful it could be being the belle of the Congressional Ball, and it is a fair question. Remember it has been only a tad bit over a month since AOC went to Florida to parrrtyyyyyy and came down with COVID as my colleague Nick Arama covered here last month with this post — AOC Comes Down With COVID After Partying in Florida. From that story…

New York Rep. Alexandria Ocasio-Cortez’s office just released a statement saying that she has tested positive for COVID, is experiencing symptoms, and is quarantined at home.

AOC is vaccinated and also got a booster shot last fall, according to her office. She encouraged everyone to get a booster and follow CDC guidance, the office said.

This follows her trip to Florida, where she was spotted partying without a mask at a crowded drag brunch with actor Billy Porter in Miami, hugging people, as well as on another occasion eating out at a sushi restaurant in Miami Beach without a mask.

Maybe if she had been tripled vaxxed with a bubble around her and she had not left New York where she and her ilk were DEMANDING you wear a mask instead of going to Florida where you…don’t need to wear a face diaper.

Anyway, the social media star admitted in a post on Instagram that she has been feeling stressed lately and she and her boyfriend, Riley, had read that if you dunk your face in ice-cold water it kinda helps your body do a stress reset.

From the text of the video she posted…

“Ok so no lie I have been very very stressed out lately and today I found myself staying in a stressful mental pattern that was just creating more stress for myself,” reads text overlayed on a video AOC posted. “I wanted to interrupt that.”

“Riley and I read previously that dunking your face in a bowl of ice water can be a way of redirecting by forcing your body to do a kind of reset of your parasympathetic nervous system, so I’m going to try it,”

Check out the video below…

Don’t you love her beau cheering her on saying: “Good job, good job!” while her face is submerged? Forget Harry and Meghan, this is a power couple right here, folks, we can all look up to. Also, I love that her dog is just looking on and not impressed. He puts his face in ice-cold toilet water all the time but is stressed out by her antics.

Now, I don’t blame her for one minute because she is stressed. She was not elected to fix all the problems of this country but she has willingly taken up the mantle to tackle all of our nation’s problems with zero knowledge of them. Actually, she doesn’t know why she was elected either. She just happened to beat some tired old white guy in a primary.

As my colleague, Jeff Charles, wrote over the weekend in a VIP piece here (You can join VIP and get a discount using code LADUKE) Democrats’ Progressive Faction Is in Serious Denial — it is not easy being a trendsetter for destruction.

Progressive lawmakers in the Democratic Party just can’t seem to take the hint. At this point, it is abundantly clear that nobody likes them. But they still insist that America loves their silly socialist solutions. If the phrase “lack of self-awareness” were a group of people, it would be The Squad and the rest of their ilk.

Unfortunately for less-insane Democrats, the far-left has become a ball and chain wrapped tightly around the ankles of the party and will undoubtedly be one of a mile-long list of reasons why they are headed towards a major shellacking in the midterm elections. In response to claims that progressives are dragging the party down, Rep. Cori Bush (D-MO) took to Twitter to defend her crew.

“In case you hadn’t caught on by now, every time there’s a media push blaming progressives, there’s something conservative Democrats are trying to cover up,” she tweeted. “This time it’s that they sent 4 million kids into poverty because they killed the Child Tax Credit.”

I do have to disagree with Jeff slightly that nobody likes them…I LOVE THEM. Just when I think the world is messed up beyond repair, these fine progressives always show up and confirm it for me. I don’t know about you but it is oddly reassuring.

Maybe all the Squad should dunk their faces in cold water to relieve stress. Hopefully, they all have a Riley cheering them on, telling them good job. Support in these critical times is important. I know this because I read that somewhere and just believed it was true.

Let’s hope this new method of submerging your ever so radiant mug into ice-cold water destresses you, AOC. Your party seems to be headed to an iceberg in the North Atlantic in November and some might say that you and your crew are the captains of the ship soon to hit that towering mountain of electoral ice. This is NOT to suggest you submerge your whole body in ice-cold ocean water — that is NOT good. Remember when Leo DiCaprio became a frozen fish stick at the end of Titanic? Yeah, it’s bad like that.

Once again I must state that AOC is simply a national treasure and we need to appreciate these moments. Soon, she will leave Congress to go make more money for a think tank and we will not have her around anymore to be entertained by.