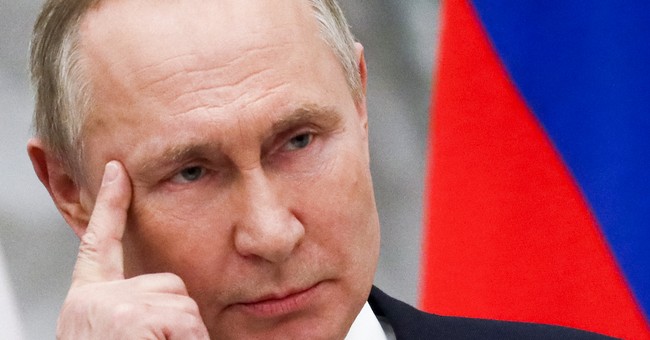 Today has been the proof of the pudding for the geopolitical strategy developed by Anthony Blinken under the guidance of our very own Metternich and Machiavelli, that would be Joey SoftServe and Kamala Harris. Unfortunately, the results have not been encouraging. About four hours ago, Russian President Vladimir Putin gave a speech that recognized the autonomy of Donetsk and Luhansk, two major Russian-speaking areas in Eastern Ukraine. He also expounded upon the theory of perpetual Russian victimhood in a way that would have had CRT guru Ibrahim X. Kendi running for his notepad. Our posts on this are at Putin Gives a Bonkers Speech on Ukraine, Drops the Last Puzzle Piece in Place for War, and Vladimir Putin Runs the Table in Ukraine and Shows Joe Biden to Be a Feckless and Unreliable Security Partner. Shortly after the speech, Putin ordered Russian peacekeepers into Eastern Ukraine.

For all the TDS foreign policy “experts” who are whinging and crying about Americans being reluctant to go to war with Russia over Ukraine,

keep in mind that the root cause of this crisis is the decision made during the George W. Bush administration to not only expand NATO to nations like Hungary and Poland, but also to former Soviet states like Latvia, Lithuania, and Estonia. That decision was made on the assumption that Russia was a spent geopolitical force, an assumption that, in retrospect, seems ill-advised.

How this plays out now is anyone’s guess. The White House has already ruled out sanctions on Russia for recognizing the autonomy of Donetsk and Luhansk and the peacekeepers seem to fall within the “minor incursion” parameters that Joe Biden established in January. I don’t know what level of risk the Ukrainians are willing to take by accidentally, or not, killing Russian troops. I’d just note that under the UN “peacekeeping” definition, both sides have to agree to a ceasefire before deployment. That hasn’t happened in this case which leads one to believe that the primary purpose of the Russian troops is to get some of them killed. So we haven’t seen the last of this melodrama.