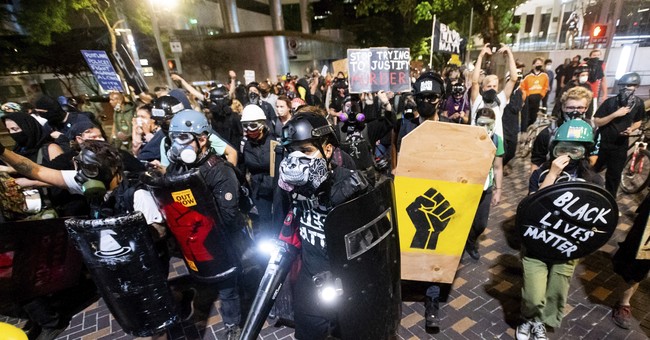 There’s a story that hasn’t been getting a lot of the network news yet, and it may not — because it involves allegedly armed leftists and an armed homeowner.

The leftists had gathered in Portland, Oregon at Normandale Park on Saturday night to march against the police shooting of Amir Locke that happened in Minneapolis on Feb. 4. A homeowner confronted members of the group at the park. A witness said that there was a lot of arguing between the homeowner and the group. Another report said that the homeowner confronted them about blocking traffic, a common BLM action. Then the shooting started.

The leftists did not come out well at the end of the encounter and neither did the homeowner.

At least one woman was killed and five were wounded. The homeowner was among the wounded, a source with direct knowledge of the investigation told Oregon Live.

Three of those injured suffered life-threatening injuries, including the man who was shot by a protester, the source said.

It appears the armed neighbor acted alone and is not associated with an organized political group, according to the source.

Police issued a statement Sunday, calling the scene at the park “extremely chaotic.”

“… (A) number of witnesses were uncooperative with responding officers,” police said in the statement. “Most people on scene left without talking to police. Detectives believe a large number of people either witnessed what happened, or recorded the incident as it unfolded. This is a very complicated incident, and investigators are trying to put this puzzle together without having all the pieces.”

Typical reaction even if they are shot: They won’t talk to the police. And why is anyone allegedly removing shell casings from the scene? That would suggest that someone is trying to cover up something here and it also could be potentially a criminal act.

Then when the police held a press conference to talk about the shooting on Sunday, it was interrupted and shut down by hysterical protesters. This was something else, the police information officer just let them go. But they were so incoherent it was hard to even decipher what they were trying to say apart from screaming that “white supremacists” were trying to kill them and the woman yelling about people trying to kidnap her. The cop was trying, at points, not to laugh at them. This rant was quite something. Should we also tell her that the mask she’s trying to rant through is completely ineffective?

They claimed that they were the ones terrorized by “Andy Ngo doxxing them.” Meanwhile, it’s been residents, the police of the city, and Andy Ngo who have been terrorized by BLM/Antifa for the past couple of years in dozens of riots and violent actions. Ngo has been attacked multiple times.

They’re complaining about the police response, but aren’t these the people who want to defund the police? Do they not realize how inconsistent their thought is? They expect everything while doing all they can to attack the police.

Then they follow Lt. Nathan Sheppard after he leaves the presser, verbally assailing him. Black lives matter, but not when they disagree with you, to these people. They’re still trying to dictate to him.

We’ll have to see how this shakes out and what charges there are for anyone, but imagine you have an emergency declared for actual peaceful protests in Canada yet Portland has been out of control with violent BLM/Antifa/radical leftist protests for years. And all of this real insanity continues.