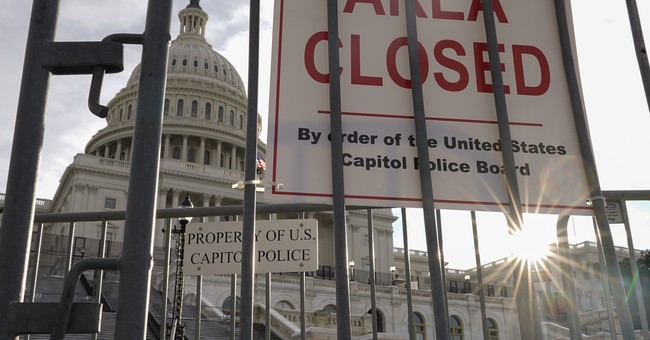 I can see it, now. Jen “Circle-Back” Psaki will claim the administration had zero involvement with the decision to reinstall the security fence around the Capitol Building, previously fenced off after the Jan. 6 riot, prior to Joe Biden’s State of the Union Address. Space cadet extraordinaire Nancy Pelosi will ramble incoherently about it, when asked by reporters at her ridiculous weekly press conference.

And, Joe? “Open Borders” Biden, who all but installed one-way, northbound people movers along the Mexican border and hired welcoming Mariachi bands to greet the hoards of illegal aliens streaming across unabated, will make an utter fool of his hypocritical self when questioned.

As reported by Fox News, security officials will reinstall the fencing next week ahead of Biden’s March 1 address. The “official” word is Capitol Police are “bracing for a potential “Freedom Convoy” truck protest to arrive in Washington, D.C., prior to the speech.

According to Fox, Capitol Police say they are “aware” of protests heading to D.C., and are making plans to “facilitate” “First Amendment protest activity” — while also working with law enforcement agencies and the D.C. National Guard to prepare for Biden’s address.

Law enforcement agencies across the National Capital Region are aware of plans for a series of truck convoys arriving in Washington, DC, around the time of the State of the Union. As with any demonstration, the USCP will facilitate lawful First Amendment activity.

The USCP is closely coordinating with local, state, and federal law enforcement agencies, including DC’s Metropolitan Police Department, the United States Park Police, the United States Secret Service and other allied agencies to include the DC National Guard.

Then a later update:

The United States Capitol Police and the United States Secret Service have been closely working together to plan for the upcoming State of the Union. The temporary inner-perimeter fence is part of those ongoing discussions and remains an option, however at this time no decision has been made.

Following the Capitol riot, House Democrats — particularly Pelosi — insisted the security fencing was a needed precaution, while Congressional Republicans accused Biden and the Democrats of attempting to create a barrier between the federal government and the American people. Interesting. Who’s lying?

Even if a convoy similar to that in Canada shows up in D.C. prior to Biden’s no-doubt incoherent, braggadocious speech, do Capitol Police truly anticipate a riot similar to that on January 6? Based on what evidence? Perhaps a belief that COVID restrictions protesters might be just as charged up — or more so — than were avid Trump supporters at the Capitol after the Electoral College vote went down?

I can’t answer the question. But I do think an armed presence guarding a security fence around the U.S. Capitol Building, while “Open Borders” Biden is delivering a mumbling, disingenuous — at best –speech, is about as hypocritical as the Democrats can get.

And that is saying a hell of a lot.