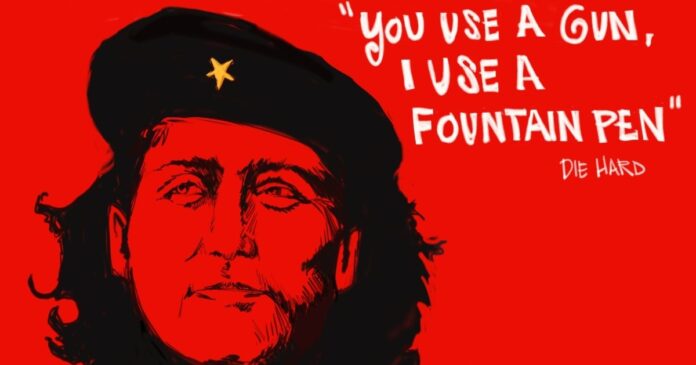 Canada has officially slipped into the abyss of countries that claim to want to care for and protect their citizens, by arresting them on charges that sound like they were read off a Chinese fortune cookie. Yet how they treat those citizens is anything but caring — more like a temper tantrum by a child

This is why the image I picked for this post is a cartoon done by Red State contributor Jim Thompson and was originally featured here with his post, “Justin Trudeau Expands His Tyranny With ‘No-Go Zones.'”

The cartoon accurately shows how the boy Prime Minister was born into wealth and privilege via a political family, and sees himself as some sort of Central American dictator. Much like his close personal friend Fidel Castro. Jim references this in his post (linked above)…

(Fidel Castro’s son) Justin Trudeau has invoked emergency powers to crush Canadian truckers and he’s doing it not with a gun, but with a fountain pen. Never mind that Ontario is lifting mandates at the same time; his invocation of emergency powers is meant to send a message, not just to truckers but anyone who supports them.

Trudeau triggered this mess with his over-the-top mandates that anyone leaving Canada into the United States and coming back needed to be shot up with something that is, at best, an experimental therapeutic drug. When the truckers and others said enough is enough, Trudeau immediately went into his reflex, authoritarian position, and started having delusions of grandeur of being the brave dictator that Papa Fidel never was.

RedState was all over the events in Ottawa Friday, showing the thuggery on display at the orders of the leader of a democracy — and here are some of the examples…

As the articles above clearly show, this is not how a well-functioning democracy works. Hell, you don’t need to read anything, being there are hours upon hours of video showing what was happening for three weeks before now, and then the government’s reaction yesterday.

If I could paraphrase a chant heard here in the States during contentious protests… This is NOT what democracy looks like. You don’t send in the cops to remove protestors for protesting, when they are NOT harming anything. The streets were filled and cars were able to navigate around the city, although it might have taken a bit longer due to the mass of people. Boo Hoo.

Trudeau and his empty-headed rhetoric of claiming these people were a “minority” and were racists and homophobic fell on deaf ears because once again, HUNDREDS OF HOURS OF VIDEO showed different scenes. However, this is what people like the boy dictator always resort to, lying and covering up the lies, and hoping no one notices.

One of the people I have been following doing those Facebook Live videos is a guy by the name of The Real Pat King, and on Friday, he was arrested and got part of it on his live feed. You can watch that part right here

Remember what I said about people being charged with things that sounded like coming out of fortune cookies? Here is one of the charges that the Trudeau Government is giving out like candy.

counseling to commit the offence of mischief

This is all being done under the Canadian Emergency Powers Act, which gives the tinhorn dictator extraordinary powers to do what he is doing and charge people with counseling those to commit mischief. They can be held for up to two weeks with no bail hearing, and they will have to sit and think about how bad it is to commit mischief that the thin-skinned Trudeau does not find acceptable.

Canadian journalist Andrew Lawton wrote in his piece below exactly what the overall implications of Trudeau triggering this act to lash out with his temper tantrum mean to Canada and her citizens. I also had to appropriate part of the title of his piece for mine, being it perfectly fits the mood.

A banana republic without the warm weather

Ottawa under the Emergencies Act is quite a different place from even a few days prior.

Yesterday, police set up a “secure area” and vowed to block anyone without a “lawful” reason from entering. Participating in the protest peacefully, to the Ottawa Police Service, is apparently unlawful.

Moreover, they say it’s incumbent on those they detain and question to offer evidence that they are allowed to be there – to prove their innocence, in other words.

This morning, Ottawa police threatened to arrest journalists who don’t “keep a distance” from their crackdowns on protesters.

This is in addition to the ongoing freezing of bank accounts without due process or legal recourse, and threats of removing protesters’ children and pets.

Mobility rights, freedom of the press, freedom of peaceful assembly, the right to be free from unreasonable search and seizure. These rights were edited out of Trudeau’s version of the Charter the moment he invoked the Emergencies Act, his gaslighting notwithstanding.

“We will not be suspending fundamental rights,” Trudeau said, somehow with a straight face.

Andrew has been a long-time member of the press in Canada, and he received some pepper spray in the face yesterday for doing nothing more than reporting on what was happening. He obeyed all commands by the police and was not blocking streets or aiding anyone in the act of committing mischief. He was reporting the story for the people of Canada, and he was attacked by the Trudeau Honor Guard.

Banana republics are generally places where the weather is warm and you can get a tan quite easily. So easily, in fact, that Justin Trudeau would NEVER have to put black shoe polish on to take a look, he would just need to bake the rest of his addled brain to complete the job of losing all sense of rationality.

Yet, when a Fidel Castro wannabe is ruling north of the 38th parallel-and there are no bananas or palm trees in sight for that term to be used correctly-I believe we need another name.

Maybe ‘snowball republic,’ but I’m not sure. I’ll have to think about it. While I do, America, you better get ready.

You know this is coming here.