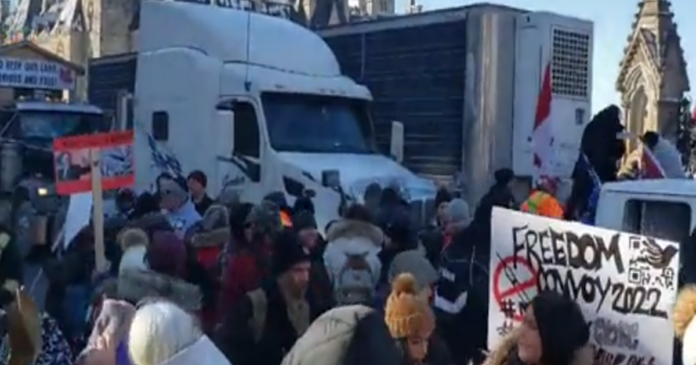 The crushing of the peaceful Canadian rebellion has begun, and it is the nonsensical, fever dream that Canada’s Prime Minister Justin Trudeau has been yearning to make happen. You may feel what I’m saying is a bit harsh, but when the leader of a Western Democracy spews this nonsense at the death of the dictator Fidel Castro…

“It is with deep sorrow that I learned today of the death of Cuba’s longest serving President.

“Fidel Castro was a larger than life leader who served his people for almost half a century. A legendary revolutionary and orator, Mr. Castro made significant improvements to the education and healthcare of his island nation.

“While a controversial figure, both Mr. Castro’s supporters and detractors recognized his tremendous dedication and love for the Cuban people who had a deep and lasting affection for “el Comandante”.

“I know my father was very proud to call him a friend and I had the opportunity to meet Fidel when my father passed away. It was also a real honour to meet his three sons and his brother President Raul Castro during my recent visit to Cuba.

“On behalf of all Canadians, Sophie and I offer our deepest condolences to the family, friends and many, many supporters of Mr. Castro. We join the people of Cuba today in mourning the loss of this remarkable leader.”

I’m feeling pretty good about my opening characterization of this rotten individual.

That Trudeau-promised crackdown on those who have been peacefully opposing his illogical COVID mandates began in earnest Thursday night, and is continuing today on Friday, February 18th, 2022. My colleague Streiff covered part of this early this morning, right here: Canadian Stasi Snatch Freedom Convoy Organizers off the Street as Trudeau’s Crackdown Begins. From that piece…

First and foremost, the people who bleat the loudest about the danger to democracy are only in favor of democracy so long as they get their way. In a way, it validates the old saw about democracy being two wolves and a sheep voting on what to have for lunch. We need to be thankful that our Founding Fathers were wise enough to realize that democracy is simply a gateway to mob rule and to put in place checks and balances to prevent it from becoming the way we are governed.

Secondly, Trudeau is a fascist. His use of an emergency powers act clearly intended for wartime use or when the country was invaded to declare war on Canadians demanding that he stop his illegal rule-by-decree schtick reveals him to be the philosophical, if not the genetic, descendant of Communist strongmen (strongthings? because Trudeau is hardly a man).

Please check it out for videos of some of the protest leaders being arrested for just standing on the streets, chatting with others.

Well, the pressure has continued, as the Ottawa Police started to move on protesters Friday, as captured by Canadian journalist Andrew Lawton.

The protestors are also using snow to block the path of the police.

They also arrested one of the most vocal leaders on Facebook of the convoy, a gentleman by the name of Pat King, who was stopped in a car driving into the protest area Friday morning and captured it here. His offense was for committing mischief in Canada, which — if you know anything about Canada — sounds about as serious as a two-minute roughing penalty in hockey. However, being I’m not anywhere near an expert on the level of seriousness of what laws you can break in Canada, maybe I’m wrong and it could be a five-minute penalty.

Now, being I want to be 100 percent clear, so those who have knee-jerk reactions to anything that they do not have a grasp on can understand what is going on in Ottawa — these protestors have been PEACEFUL. They are asking for their government to relieve unscientific mandates. This whole mess was started by Trudeau, when he instituted an out-of-thin air mandate for truckers to have a vaccine shot and passport to cross the border into the United States and back to Canada.

This is on top of the idiotic edicts of still putting any dirty cloth over your face to be in school or eat at a restaurant, which has now shown to be ineffective, according to the CDC.

That Trudeau had to resort to using the Canadian Emergencies Act, which allows him to seize bank accounts and property of people peacefully assembling — and are not terrorists that the act was meant to defend against — shows how weak-minded he is. All good authoritarians use powers to keep a hold of their power, and generally at any cost. This should backfire brilliantly on him, and I truly hope it does.

Now that the rumor is out that a similar event will be happening in the United States I believe it is a fine time to consider what Steiff ended his piece above with this warning.

This is no time for us to smirk and point fingers at how what was thought of as a Western democratic government has become something out of the Third World in less than a month. However, I have to admit that the noxious, anti-American bias of the Canadian left makes it damned tempting. If we aren’t vigilant, the same fate awaits us here in America.

Time to be vigilant, indeed.