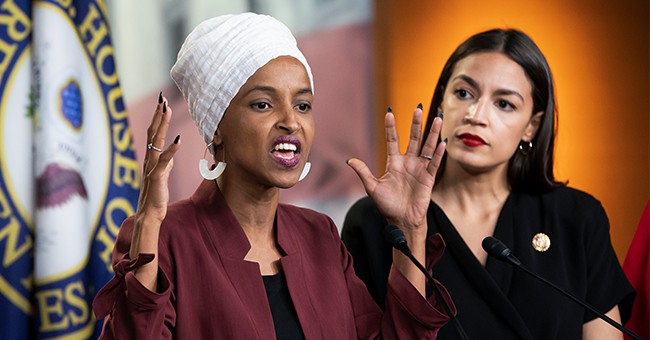 A Democratic Congressional Campaign Committee (DCCC) internal poll of voters in competitive or “swing” congressional districts was leaked earlier in the week. On Tuesday, Politico got the head’s up, and the online outlet SFGATE.com got the slide decks on Thursday.

The top line from the presentation was gruesome for a party that was already sure that November 2022 had the potential to be a bloodbath.

The DCCC found that critiques of COVID-19 restrictions were slightly less potent than other issues. In swing districts, 64% of voters agreed with the statement that “Democrats in Congress support defunding the police and taking more cops off of the street.” The internal poll found that 80% of self-defined swing voters in competitive districts agreed with the same statement…

Sixty-two percent of voters in contested districts agreed with the statement, “Democrats in Congress have created a border crisis that allows illegal immigrants to enter the country without repercussions and grants them tax-payer funded benefits once here.” Seventy-eight percent of swing voters in those districts agreed.

Sixty-one percent of swing district voters agreed with the statements, “Democrats in Congress are spending money out of control,” and, “Democrats are teaching kids as young as five Critical Race Theory, which teaches that America is a racist country and that white people are racist.” And 59% agreed with the statement, “Democrats are too focused on pursuing an agenda that divides us and judging those who don’t see things their way.”

The DCCC describes the practical import of the data this way.

The Democratic Congressional Campaign Committee is recommending a new strategy to endangered members and their teams, hoping to blunt the kinds of GOP attacks that nearly erased their majority last election and remain a huge risk ahead of November. In presentations over the past two weeks, party officials and operatives used polling and focus group findings to argue Democrats can’t simply ignore the attacks, particularly when they’re playing at a disadvantage. A generic ballot of swing districts from late January showed Democrats trailing Republicans by 4 points, according to the polling.

It wasn’t all bleak, though: The data showed that Democrats could mostly regain the ground lost to Republicans if they offered a strong rebuttal to the political hits. When faced with a “defund the police” attack, for instance, the presenters encouraged Democrats to reiterate their support for police. And on immigration, they said Democrats should deny support for “open borders or amnesty,” and talk about their efforts to keep the border safe.

If Democrats don’t answer Republican hits, the party operatives warned, the GOP’s lead on the generic ballot balloons to 14 points from 4 points — a dismal prediction for Democrats when the GOP only needs to win five seats to seize back the majority. But when voters heard a Democratic response to that hit, Republicans’ edge narrowed back down to 6 points, giving candidates more of a fighting chance, especially since those numbers don’t factor in Democrats going on the offensive.

Think about that for a moment. If your candidates jettison all connections to Democrat policy priorities, they can claw their way from 14 points down to only 6 points down. As a reminder, the technical term for losing by 6 points is “loser.”

For this strategy to work, the voters must be profoundly ignorant, and the candidates must lie. And even if you are a proficient liar and the voters are more stupid than usual, it is really hard to walk away from stuff like this from some of the most high-profile members of your caucus.

The framing of the story is interesting. All of these issues-illegal immigration, crime, COVID tyranny, using the school system to propagandize children-are considered “culture war” issues.

That is raising hackles among progressives who are starting to see themselves as the people who have been fingered to take the blame for what happens in 2022 (read this from my colleague Bonchie, That Backlash Against Democrats Everyone Predicted Has Arrived). This post is an excellent example of how the progressives see the ax poised over their necks and can’t do anything about it other than cry.

Politico released select findings of an alleged Democratic Congressional Campaign Committee (DCCC) poll that insisted Democrats running for Congress should avoid so-called “culture war issues” as the 2022 midterms loom. Aside from the fact that the poll was presented as good faith advice rather than what it almost certainly is–preemptive scapegoating of progressives in anticipation of a near-certain midterm blow out–the article offers useful insight into how very serious, material issues are dismissed as “culture war” frivolity simply because they are seen as disproportionately impacting people of color or LGBTQ.

This isn’t to say “culture war” issues cannot exist in the sense that relatively low stakes culture issues take center stage at the expense of bigger issues. The recent two-day news cycle about the gender of M&M’s comes to mind. But police budgets, severe border crackdowns, and the basic humanity of trans people are tremendously urgent political contests with real human stakes. Just because they don’t appear to impact our culturally understood and implied “swing voter” of Joe White Guy in the suburbs doesn’t mean they are mere “culture war” fodder. (Though it’s worth noting many of these so-called “culture war” issues, like directing resources from police to social welfare would help working class whites. But since they are only used an avatar for left-punching from our cynical elite rather than humans, this is deemed irrelevant.)

Ultimately, running right on “culture war issues” is what a party does when it can’t offer big picture economics wins. When it doesn’t support single payer healthcare, universal basic income, free college, or myriad other nominally race-neutral policies, If it cannot provide a meaningful enough alternative to Republicans, just tweaking differing Covid relief packages, then this is the logical end point. The idea that Democrats don’t have the image of a party that cares about “kitchen sink” issues because they haven’t recently done anything to promote robust, cross-racial economic populism, and thus ought to do more of it, isn’t even entertained as an option. No, it must be because they talk about other “culture” issues that are perceived to impact people of specific races rather than white people, or in some post-racial way. The solution therefore isn’t to become more economically populist–it’s to run from anything that polls badly and hope people don’t notice.

All in all, this is shaping up to a most interesting year, assuming Joe Biden hasn’t provoked a thermonuclear exchange with Russia and China, and the economy hasn’t been thoroughly trashed. The Democrats are slowly realizing that the policies and rhetoric popular in a handful of very, very liberal congressional districts are loathed by most Americans. Having pushed this garbage for two years, the Democrats are now trying to distance themselves from it by declaring both the rhetoric and its loudest advocates as extreme. Of course, this strategy only works if our candidates let them get away with it. And, as we belong to the “stupid party,” that is a very real possibility.