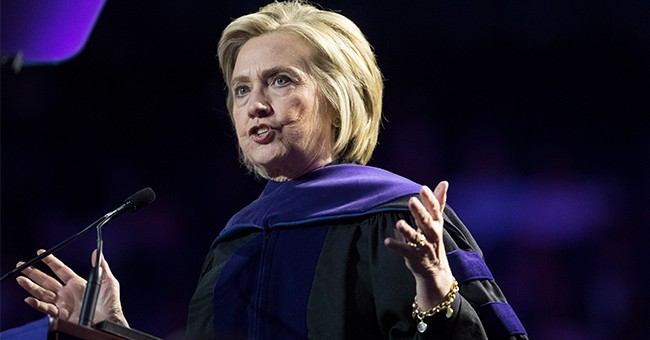 As we previously reported, Hillary Clinton ducked questions the other day about the Durham probe. A recent filing from the probe said people working for her campaign worked with a tech executive to collect “derogatory” information on Donald Trump by looking into DNS look-ups in various servers including Trump Tower and the White House. The purpose was to support a “narrative” about a Trump connection to Russia. That was on top of information that had already been alleged about intel in a CIA memo that Clinton wanted to do that to distract from the investigation into her own private server scandal that was exploding at that time.

But when she was approached by a Daily Mail reporter, she rushed as quickly as she could into the building she was entering.

This is some picture.

She ducks questions from foreign reporters who likely wouldn’t treat her with the kid gloves with which she is treated by American media, but today, she did comment on social media. She claimed that it was “Trump and Fox” who were creating a “fake scandal” to distract from his real ones.

Talk about projection. She allegedly cooked up the Russia smear to distract from her own scandal. She’s once again accusing Trump of what she’s alleged to have done. She just can’t stop. She is, even now, stuck in spreading the “vast right-wing conspiracy” mode to deflect from her scandal.

Now, claiming this is on “Trump and Fox” when it comes right from the Durham legal filings is ridiculous. Plus she leaves out the three people indicted already, including her former campaign lawyer and another person engaged in the alleged plot, who were both charged with making false statements. In support of her argument, she cites Vanity Fair, which is roughly equivalent to citing her own speechwriters, it has that much veracity. The Vanity Fair article sounds like no one even read the actual Durham filing. They claim the filing didn’t refer to the Trump White House, when in fact the filing said they mined the DNS lookups of the EOP (Executive Office of the President) to look for derogatory information on Trump. Vanity Fair also completely ignores that the filing specifically said they were surveilling the DNS lookups at other places connected to Trump to find things to push the Russia narrative including Trump Tower and Trump’s Central Park West apartment building. Why? Because the tech executive “was seeking to please certain ‘VIPs’ referring to individuals in Law Firm-1 and the Clinton campaign.” Vanity Fair ignores (or doesn’t even know) that in the indictment of former lawyer Michael Sussmann it says the “tech exec” claimed he had been offered a job in an anticipated Clinton Administration. So she cites something that doesn’t debunk anything.

By commenting on it, she feeds the story more, doing herself no favors. Plus it’s never good to talk when you don’t know what legal actions might be pending and might involve you. But you notice what you don’t see her do? Deny the plot to smear Trump. What’s the explanation for the indictment of people working for her? Notice she’s silent on those questions.

Jonathan Turley had a few things to say about Hillary’s response.

Hillary Clinton might also want to check what former Director of National Intelligence John Ratcliffe said on Monday — that he thought the intelligence he saw and gave to Durham supported “quite a few more indictments.”