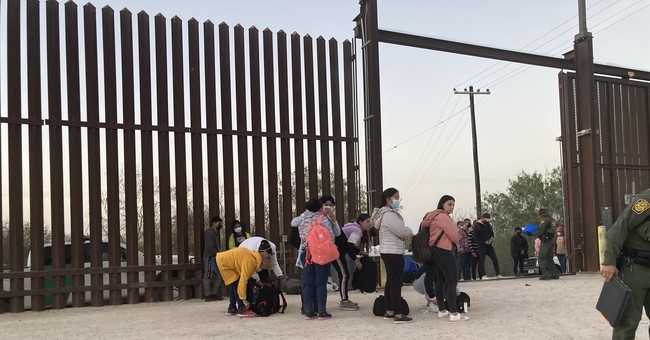 We can file this one under “They Think You’re Stupid.”

Democrats seeking to retain their seats in Congress are about to start telling America that they are not down with open borders. That’s right, folks. Amid a migrant crisis that began shortly after Democrats took control of the White House and the legislative branch and is still ongoing, they are about to start pretending they were for immigration enforcement the whole time.

Politico published a report detailing how the Democratic Congressional Campaign Committee is recommending various messaging strategies to counter the onslaught of criticisms coming from Republican politicians and conservative media. On immigration, an issue that has become an area of concern for American voters, the group is urging the party to start emphasizing the importance of border security and to deny that they support “open borders” and “amnesty.”

This is a tall order for a party that has repeatedly touted open borders, advocated for amnesty, and smeared anyone who disagrees with them as xenophobes who are afraid of brown people. Indeed, it doesn’t take a rocket scientist to see that convincing the public to buy the notion that Democrats are truly concerned about securing the border is the proverbial dog who has no interest in hunting.

The same people who responded with thunderous applause and plaudits when President Joe Biden unveiled his plan to provide a pathway to citizenship for the tens of millions of illegals residing in the country are about to start telling you they want to enforce immigration law. The folks who cheered when Biden rolled back former President Donald Trump’s immigration measures like the Migrant Protection Protocols (MPP) are getting ready to claim they don’t want unfettered legal and illegal immigration.

Fox News reminds us how Democrats sought an open borders agenda all through the past year:

Meanwhile, many Democrats have also backed a number of congressional efforts to grant amnesty for millions of illegal immigrants. Democrats pushed for an immigration plan approved within days of President Biden’s inauguration, which eventually became the U.S. Citizenship Act of 2021, and was headlined by an eight-year path to citizenship for illegal immigrants already in the country.

But with no Republican support in the Senate and a 50/50 chamber, the effort faded away. Instead, Democrats included various forms of amnesty in their proposals for the Build Back Better Act — which could be passed via the budget reconciliation process and therefore not be stopped by a Republican filibuster.

The bill outlined a variety of proposals for amnesty or protections for illegal immigrants, in addition to sweeping changes to legal immigration. The first of those plans would grant a pathway to citizenship for DACA and Temporary Protected Status recipients, farmworkers and those deemed “essential workers.”

When that didn’t work, Democrats put forth a watered-down proposal that would only grant amnesty to illegals who entered the country before 2010. This was also rejected. Democrats then offered another plan that would “allow expanded parole powers to grant legal status, including work permits, to an estimated 8 million illegal immigrants for up to 10 years,” according to Fox. Republicans told them to pound sand.

At this point, it is amazing that Democrats would even consider trying to sell the public on the idea that they have seen the light and are serious about dealing with the immigration issue. To be fair, there are some Democratic lawmakers like Henry Cuellar (D-TX) who advocate for border enforcement. He has been a vocal critic of the Biden administration over its handling of the migrant crisis. But finding folks like him on the left is like trying to find an open borders program that doesn’t make Rep. Alexandria Ocasio-Cortez (D-NY) smile.

The activist media has largely ignored the situation at the southern border over the past few months. They are taking an “out of sight out of mind” approach to the matter. Nevertheless, Border Patrol had over 178,840 encounters with migrants and illegals at the southern border in December. In response to this, the Biden administration has significantly decreased deportations.

The Center for Immigration Studies (CIS) noted that under this administration, “ICE removals have plummeted to a fraction of normal levels.” The organization also reported yesterday that removals dropped by 70 percent in the fiscal year 2021. The author wrote:

Preliminary numbers released by ICE reveal that removals fell more than 70 percent in FY 2021, even as Border Patrol apprehensions at the Southwest border reached all-time highs. Those numbers show that the Biden administration, which has fallaciously accused Donald Trump of “dismantl[ing] our nation’s immigration system in its entirety”, has itself taken a wrecking ball to immigration enforcement. These numbers are shocking, and we don’t even know the worst of it.

These numbers are so glaring that the chances of people believing Democrats’ change of heart on immigration are about as favorable as Rep. Eric Swalwell (D-CA) saying something intelligent. The fact that a recent CNN poll revealed that immigration is a top concern among American voters shows why leftist politicians are going to attempt this pivot. However, the Democrats are about to learn that their newfound pro-border enforcement stance is too little, too late.