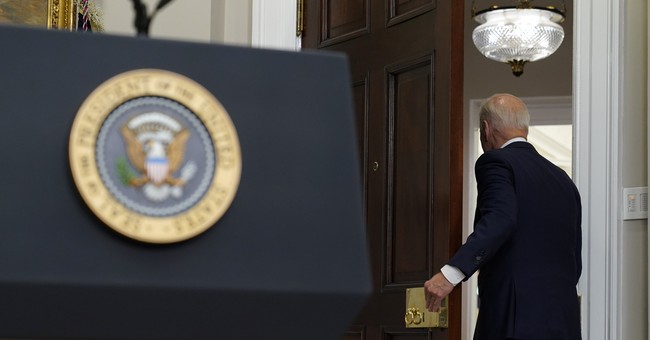 We reported Tuesday on a comprehensive poll of all 50 states which showed President Joe Biden in big trouble in all but four of them (Vermont, Hawaii, Massachusetts, and Maryland).

One of the most notable things about the poll was the fact that Biden’s approval rating was lowest in West Virginia (17%) which probably explains why Sen. Joe Manchin (D-W.Va.) has said he doesn’t give a rat’s patootie about whether or not “woke” Democrats decide to primary him in 2024 (assuming he runs for reelection) over his various and very public disagreements with Biden on issues like the filibuster and the “Build Back Better” agenda.

But a closer look at the numbers shows something even worse not only for Biden but for Senate Democrats who are desperate to hold on to the 50 seats they have, which along with Vice President Kamala Harris being the tiebreaker in 50-50 votes gives them a slight majority.

In Senate battleground states where there are races that are expected to be very competitive, here’s how badly Biden is underwater:

The catastrophic numbers might explain why some of the more vulnerable Senate Democrats running for reelection this year – including Raphael Warnock in Georgia, are laughably trying to pretend they’re proponents of tax cuts:

It’s no coincidence that the Democrats most involved in the new push hail from the toughest battlegrounds: Sens. Mark Kelly of Arizona, Maggie Hassan of New Hampshire, Catherine Cortez Masto of Nevada and Warnock. But as inflation grips the economy and prices continue rising, those senators say they are merely responding to their constituents’ concerns.

Nah – what’s really happening here is that these panicked Democrats are responding to their own concerns about a possible Election Day drubbing and are, as per the norm, trying to pretend they’re something they’re not in an effort to deceive voters.

Warnock in particular should be very concerned. Polling out of Georgia doesn’t just show that Biden is deeply unpopular, but it also indicates that if the election were held today, the Republican nominee – whether it be incumbent Gov. Brian Kemp or former Sen. David Perdue – would defeat potential Democrat nominee Stacey Abrams, an ally of Warnock’s.

Even worse for Warnock was another poll that came out around the same time which showed his potential Republican opponent Herschel Walker with a slight lead. In fact, of the four polls taken to date on that possible matchup, Walker has led in three of the four.

Whoever the eventual Republican nominee is, it’s imperative that not only they remind voters of how important it is to have a GOP majority in the event Joe Biden gets to nominate another Supreme Court Justice, but also to jog memories on how Warnock sided with Joe Biden in sabotaging Georgia during the heated debate over the 2021 election reform bill, which saw Major League Baseball pull the All-Star game, which hurt the very minority voters Warnock, Abrams, and Biden claim they want to protect.

Warnock later tried to kinda-sorta walk back his comments about the bill, but that was after the damage had been done.

Georgia voters must never forget that – not about Warnock and not about Abrams, and respond accordingly come election time.