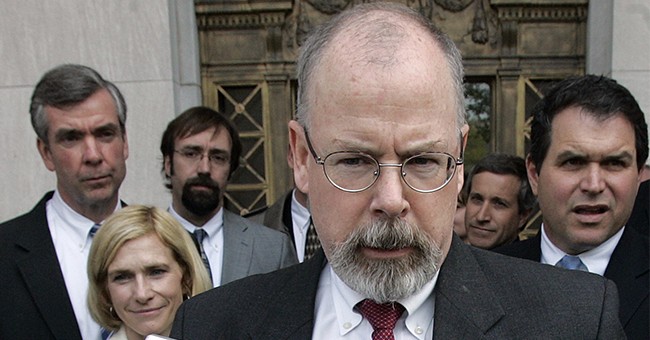 Some days ago, John Durham dropped a bombshell filing that confirmed what has been suspected for years – that Hillary Clinton used operatives to spy on Donald Trump.

More disturbing, though, was the revelation that those who were passing her information were exploiting a prior Pentagon contract to actually monitor the Executive Office of the President after Trump’s inauguration (click here for my take on why that happened). All of that was funneled through Perkins Coie, the now-infamous law firm which employed the currently indicted Michael Sussman.

Now, a new report from Fox News says that Durham’s investigation is “accelerating,” and that it is also targeting “other matters” outside of just Sussman (and Igor Danchenko). As an aside, the article offers a very in-depth, long-form breakdown of what has transpired with Durham.

Special Counsel John Durham’s investigation has “accelerated,” and more people are “cooperating” and coming before the federal grand jury than has previously been reported, a source familiar with the probe told Fox News…

…But a source familiar with federal investigations told Fox News that federal prosecutors cannot indict an individual and then use a grand jury to investigate matters in an existing indictment.

The source, though, said a prosecutor can indict an individual for a specific crime, and continue to use the grand jury to explore other crimes related to that individual, and beyond.

“They are looking at more than Sussmann,” the source said.

“The Government also maintains an active, ongoing criminal investigation of the defendant’s [Sussmann’s] conduct and other matters,” Durham wrote.

In other words, they wouldn’t be using the grand jury for investigation purposes if it wasn’t in order to investigate and charge other crimes, and the people involved in those crimes. It’s simply hard to believe that this all stops with Sussman and Danchenko, and Durham’s has been methodical so far. He’s not going to jump the gun until he’s got the goods.

Of course, with all this bouncing around in public now, the desperate attempt to quash the story has begun. After three days of not reporting on it at all, the New York Times and the Washington Post finally put out “explainers” on the situation that are filled with bias and omissions, including quoting the lawyers of some of the people possibly being targeted. Those stories were published at almost the same time, but I’m assured there was no coordination.

These attempts to spin away the magnitude of what Durham has found are reminiscent of the Times’ attempt to whitewash the news that Michael Sussman was going to be indicted. They ran to his lawyers and other “experts” to essentially claim that Durham had nothing. Yet, once the indictment dropped, it was loaded with evidence not previously mentioned.

In my opinion, that’s what the mainstream media is doing again. They are doing their best to get out in front of this story before more evidence drops. False narratives are already spreading like wildfire, including the idea that a tech firm exploiting a government contract to spy on a president for his political opponents is somehow “normal.”

There’s also the claim Hillary Clinton isn’t directly linked to what happened. That’s not true either. There are FEC filings that show that the Clinton campaign and the DNC made payments to Neustar, the company in question. Further, we know she paid Michael Sussman to get the data from Rodney Joffe (Neustar’s Chief Technology Officer). So, even if Joffe was promised something else (no one works for free), the fact that Sussman was paid to get the information completes the chain back to Hillary Clinton.

Because of how damning all this evidence is, the press has nowhere to go. Instead of addressing the facts as we know them, they are bringing on hacks like Jeremy Bash to spin conspiracies about Durham.

It makes perfect sense for Hillary Clinton to be spying on Trump after the inauguration. In fact, we know that Sussman went to the CIA in February of 2017. What that tells us is that Clinton was reaching for a way to try to overturn the election. Clearly, in my view, based on her actions and her public statements at the time, she wanted to find a way to prove Trump had been illegitimately elected. Once she did that, anything was on the table to “fix” the situation. Such a dismissal of Durham’s filing on the grounds it doesn’t make sense is a total farce. Everything lines up.

In short, don’t let anyone downplay what has been revealed here. It’s a really big deal, and it should be treated as such. The fact that the media are having so much trouble handwaving it all away only bolsters how serious it is. Durham is playing for keeps, and all the press spin in the world isn’t going to save those he indicts.