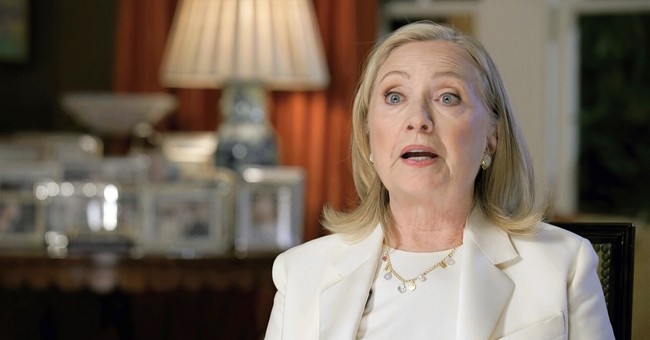 As RedState reported, John Durham dropped an absolute bombshell of a filing on Saturday detailing Hillary Clinton’s spying against Donald Trump. Allies of the DNC used a sensitive government arrangement that was started under Barack Obama’s tenure to then target the DNS traffic of Trump. The purpose of that was to try to prove a nefarious connection with Russia, with the information being passed back to the DNC and Clinton.

That scheme bolstered now-debunked tweets like this from the failed 2016 presidential nominee.

Yet, one of the most shocking parts of the filing was the fact that the spying continued after Trump was inaugurated — which begs the question of why? At that point, what would be the purpose? I think I have a pretty good idea, and to be honest, it doesn’t take a genius to figure it out.

She was trying to overturn the election.

Ask yourself why she’d even bother to keep looking into Trump if the goal wasn’t to prove he was an illegitimate president? And if that happened in say, February of 2017, she had every reason to believe the country would be plunged into a constitutional crisis that would favor her.

After all, if she was the rightful president, why wouldn’t Congress go to great lengths to change the outcome? At the very least, Trump and Pence would have been impeached, likely garnering enough Republican votes to make the gambit successful. At that point, would further steps have been taken to install Clinton as president?

Given the setup of the Constitution, that would have been difficult to accomplish, but just because something is improbable doesn’t mean it wasn’t intended. After all, we are constantly told that Trump tried to “overturn” the 2020 election despite there never being any probable path to that happening. In this case, Clinton’s desperation is not a defense of her behavior. It just shows how far she was willing to go. That she’s not being accused of attempting to “destroy our democracy” is simply a matter of the mainstream media being incredibly biased.

Regardless, even if such a maneuver by Clinton was doomed to fail after the 2016 election, does anyone doubt that she was going to use any information she found to set herself up as the rightful president in the 2020 race? There are already rumblings of her running in 2024. Clinton absolutely would have been game in the last election if she felt she had proof that Trump was a Russian stooge. That she didn’t run is yet more evidence that everything from the Mueller investigation to Crossfire Hurricane, to Clinton’s snooping, came up completely empty.

Nothing is a coincidence with the Clintons. To believe otherwise would be foolish. The continued spying after Trump became president was intentional and meant to dredge up more dirt, and that dirt wasn’t just so Hillary Clinton could say “I told you so” from the sidelines. The push to overturn the election would have been fast and furious. Hopefully, Durham recognizes the gravity of the situation and doesn’t let anyone involved in this scam off the hook. That includes Clinton herself.