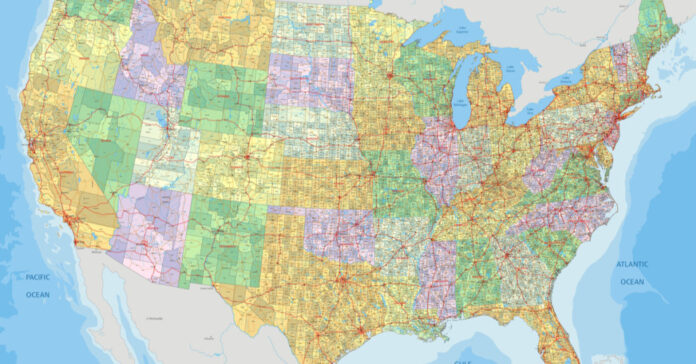 The Democrats know that they’re going to lose seats during the 2022 midterms. It’s why they’ve gone on the offensive, attacking everyone and anyone who dares to run against them.

Their agendas are too progressive for the American people. No one wants to give up their freedoms or see the country head toward socialism. Rather than changing direction, the Democrats are simply digging in their heels.

One of the ways that they believe they can win is by redistricting. Simple, right? They’ll just re-draw the district lines in the areas that are red so that they can include more blue voters. Easy peasy…

The U.S. Supreme Court has had to get involved because quite a few states have decided that they want to re-draw their maps, which would deliver big wins to the Democrats.

A 5-4 ruling has halted a lower court order in Alabama that would have required them to redraw their congressional map. The new map would have diluted Black votes and violated the Voting Rights Act.

This ruling is a blow to liberals and civil rights groups that were desperate to add another Black opportunity seat in Alabama.

The map that is currently in place – 6 Republican:1 Democrat map will stay in place through 2022 and possibly beyond.

If the redistricting in Alabama is a no-go, there’s no telling how many other redistricting efforts may be shot down as well – such as what’s going on in both New York and North Carolina, among many others.

If the Democrats decide to keep using racial quotas as their reasoning for creating new congressional districts, they are likely to find themselves in hot water. Apparently, they’re not familiar with the Voting Rights Act, or perhaps they thought they could simply pull a fast one on SCOTUS.

Justice John Roberts was quick to point out that there has been a lot of bad precedent in the past.

As it was mentioned in RedState, “It doesn’t take a legal genius to see that a court skeptical about the idea of racial quotas that has already done away with “pre-clearance” isn’t very far away from saying that unless you can prove that diluting the minority vote was the intent of drawing a district, the state’s version of the map prevails.”

It seems that the deck is stacked against the Dems, even when they were the ones trying to stack it in their favor. It’s proof that cheaters never win. It took a while for things to catch up to them, but things seem to be coming around.

Does this mean that the issue of redistricting is over? Absolutely not. There will be plenty of Dems who think that they are above the law. Some may even go as far as trying to prove how a minority vote was diluted.

Luckily, we have a SCOTUS that isn’t about to allow games to be played.

The Democrats can’t win, and as they all start to realize it, the efforts to cheat the system are only expected to increase. America, watch out.