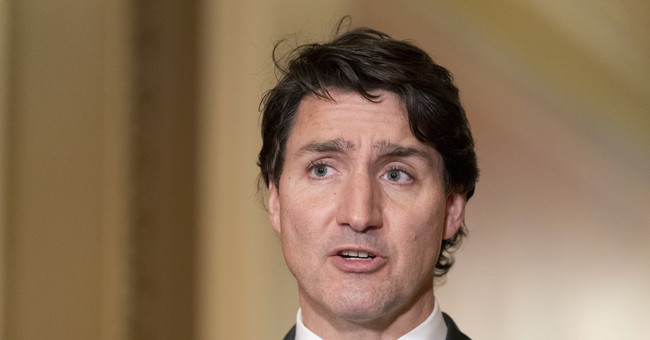 Looks to me, based on the comments by Ontario premier Doug Ford and now, Prime Minister Justin Trudeau on Friday, that they’re giving the final warnings today to the Freedom Convoy protesters — it sounds like the hammer is about to fall.

As we noted, Ford declared a state of emergency in the province which would allow the government to take more extreme actions against the protesters in Ottawa and at the Ambassador Bridge in Windsor, Ontario. He also said he was going to the cabinet to enact draconian orders against the protesters including being locked up for up to a year and getting a $100,000 fine. He also said he would move to try to have their personal or commercial licenses pulled.

In Trudeau’s statement, he threatened the truckers and protesters with arrest, saying that could affect their jobs or their ability to work. This is the same guy who knelt with the BLM, despite the group’s violent actions.

The irony is he and other politicians have interfered in and shut down their ability to work for two years, and are still threatening them with mandates. The protesters aren’t “tired of COVID” — they’re tired of Trudeau and the restrictions. He says they’ve been “heard,” yet he hasn’t even bothered to talk with them, so no, that’s just a lie.

He implies they could call in the military, although they are not “seriously contemplating” that now.

The military has already said they aren’t going to be used against the Canadian people that way. So that’s an empty bluff on his part and if he did that, he would certainly cook what’s left of his political career in Canada.

Trudeau also had a new smear against the Convoy. He was all in on the conspiracy theories that were being pushed by people like Ottawa city councilor Diane Deans — that Americans were influencing the protest. Trudeau said he had spoken to Joe Biden, telling him that they would be taking action. He said they talked about how Americans influenced the protest, contributed funding, and been present in the blockades. White House Press Secretary Jen Psaki confirmed they had talked, but didn’t mention the claims about Americans that Trudeau was trying to spread.

He’s now apparently shifting from the ridiculous “everyone there is a racist” to they’re all in the thrall of American influencers.

“Everything is on the table” to end this action, according to Trudeau, saying the borders cannot remain closed, disregarding that Canada had the borders closed for months, and he’s stopped Canadians from living their normal lives for two years.

But the truckers have said they intend to stay, even if they face arrest or the loss of their trucks; they’re in it for the long haul, until the mandates are dropped.

This is what Trudeau is trying to stomp out:

Bottom line? People want to take their rights back, and they wouldn’t be denied. Governments around the world have tried for too long to impose on the people without listening to them. People aren’t having it anymore; Canada is inspiring the world. What happens there matters to all of us, in making all the dominoes fall to unleash the control. If they now attack the protesters, it’s going to outrage the world — and they wouldn’t soon hear the end of it.