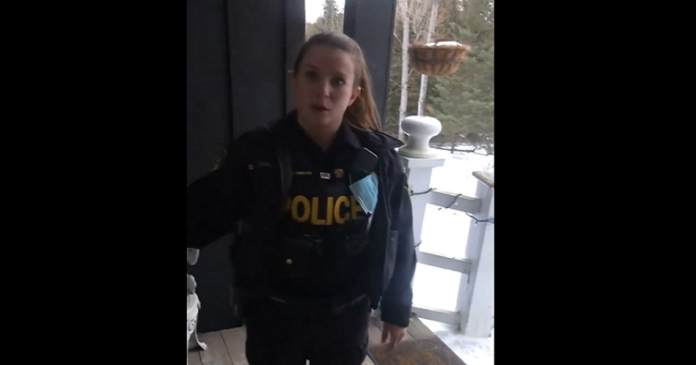 I’m a grizzled veteran of the social media wars and I thought I had seen everything, until this video from Canada which both freaked me out and made me laugh. Canada, you have to stop throwing me curve balls every 10 hours, I’m getting too old for this #$%^.

Unless you have been Rip Van Winkle’ing, you have to know by now that Canada has started a revolution of peaceful protests and it is spreading all over the internet and the world. Here are just some of the latest stories we have covered here at RedState to bring you up to speed…

Canadian Officials Land Another Blow Against the Freedom Convoy Truckers.

I covered this yesterday, being as my dear Governor is worried about what is happening across the border. Why? Here is a sample… Gretchen Whitmer Hits the Panic Button Over the Canadian Trucker Bridge Shutdowns

Well they need to resolve the issue, I’m not weighing in on the substance. I’m not getting into Canadian government policy.

But the fact of the matter is this is compromising and jeopardizing many jobs in the State of Michigan, now that the autos are already starting to slow down; some are closed or anticipate being closed in days, this needs to be resolved.

So I have been on the horn with our Canadian ambassador, with the White House and our congressional delegation with some of the Premiers in Canada. I mean, I am imploring them to get this resolved. I don’t think people appreciated what an immediate economic impact this would have on Michigan, quite frankly, and so, they understand now, and now they go to resolve it.

So I’m encouraging the White House to work with the Canadian government. Whatever it takes, they can have their conversations, but they gotta stop the blockade. Because there are hardworking men and women in an industry that is just getting back to full strength, who are now going to be outta a job at least temporarily, and are going to need unemployment.

She is just a peach and it’s such a shame she is not Governor of Georgia — but we all know Stacey Abrams is.

The reason that progressives like Gretchen are worried about this protest in the states is because of the amazing things happening with our neighbor to the north to push back on progressive policy. Yet in Canada, the government is trying to stifle these peaceful protests and this new tactic had my jaw drop to the floor.

The cops will show up at your home and tell you how to protest.

Officer Ingram: I have a card here and I’m (Officer) Ericka Ingram and this is just some information about peaceful protest, that’s all it is.

Resdient: Ok so you saw something on my facebook?

Resident: ok and you decided to come to my residence to give me information on peaceful protests?

The exchange continues for over a minute more and the amazing thing about this is that both people are just beyond polite, which is really a Candian thing. The officer is not in any way confrontational and the resident keeps her calm even though her voice does raise just a smidge. How the resident does this is beyond me. As polite as the officer is, if the law showed up in most places in the states to give you a flyer on how to protest after reading a comment on a Facebook post, that person would flip a bit.

There is no insurrection going on in Canada. The Canadian people are gathering in historic protests and they are doing it in the most peaceful way possible. Are they blocking some roadways making it harder to pass? Yup. Are they making some noise in the streets of Ottawa honking horns, revving engines, and playing music? Yup. They are petitioning their government that quite frankly does not like what they are saying but can’t really argue with the manner in which they are saying it.

This is 180 degrees from the protests in my country back in 2020 when state media under the form of CNN had the cojones to run a banner under a reporter in front of fire saying the protests were mostly peaceful.

As nice as this young officer is, at some point, you have to take a step back and question the overreach that your superiors are demanding you enforce. If there were rioters and an overall disaster in how the protestors were acting, you damn well better believe the Canadian Broadcast Company would be running tape of it 24/7. We are now moving into the third week of this event and there is no tape.

So why are cops showing up on people’s doorsteps to inform people of how to protest?

I hope it does not work.