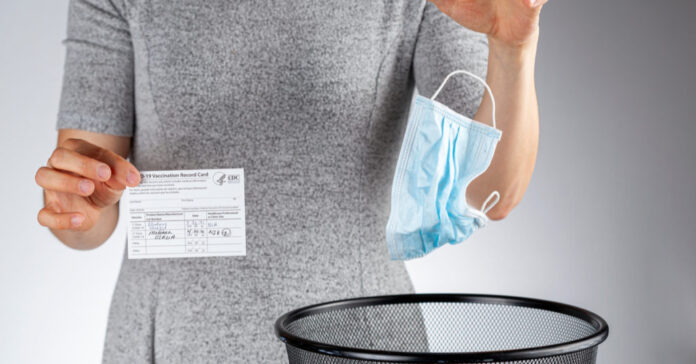 Delaware is run by a Democratic governor by the name of John Carney. He has decided that it’s time to let people in his state be able to breathe without being smothered by four to five layers of fabric. As such, he has lifted the indoor mask mandate as of February 11.

Now, keep in mind that Biden’s home state is Delaware. You should know this since he uses taxpayer dollars to visit one of his two homes there several times every month.

If it were up to Biden, we’d have to wear masks indoors for the rest of our lives. It’s his way of exerting a bit more control. So, with the lifting of this mandate, it’s clear that Carney did not get Biden’s approval on such a move. Carney acted independently.

Each time Biden visits his home state, he can choose not to wear a mask. With the mandate gone, people get their freedoms back. The lifting of the mandate doesn’t mean that people can’t wear a mask. It means that they can choose.

So, with Biden being able to CHOOSE in Delaware, the question becomes what other states will also allow for a CHOICE?

Although Biden might want to hold onto the mandates, many governors are tired of hearing people yell and holler. And, realistically, they’re getting tired of wearing the darn masks.

It’s become clear that managing the COVID pandemic isn’t done by mask mandates. Otherwise, how do you explain why Texas has fewer cases than California?

Now that John Carney has chosen to go against the typical Democratic agenda of making people wear masks indoors, he’s set the stage. Others may choose to join forces. It shouldn’t be about political agenda. It should be about doing what the science points to.

Connecticut is already talking about it. New Jersey is discussing it, too. Even Kate Brown of Oregon is talking about getting rid of the mask mandates.

Does that mean we can finally walk into a store, a restaurant, or even a museum without our glasses fogging up and our breathing becoming labored? We could ditch the masks (and that added expense in an inflation-driven world) and finally breathe fresh air. It could be glorious…

But only if the other liberal governors decide to follow John Carney’s lead.

Now, the mandates in Delaware will be phasing out. We don’t want everyone to gain all of their freedoms too soon, would we? As a result, mask mandates will continue in Delaware through March 31.

The reason for extending the school mask mandates is to ensure parents have time to vaccinate their school-aged children. Okay, makes sense. The press release also adds that “the March 31 date also allows districts and schools time to consider local mask requirements, and gives the Division of Public Health and the Department of Education time to work with schools on updates to quarantine and contact tracing guidance.

Ahh, so it seems that Delaware has given this quite a bit of thought. For any liberal governors scoffing at the moves Carney has taken, it seems that the thought of ending the mandates has been going on for some time.

Now, there are still plenty of liberal governors who haven’t even discussed lifting indoor mask mandates, including California. If anything, it seems that heavily populated areas, like LA, are even looking to create more mandates.

Some liberals will never learn. At least in Delaware and a few other states, hope is on the horizon.