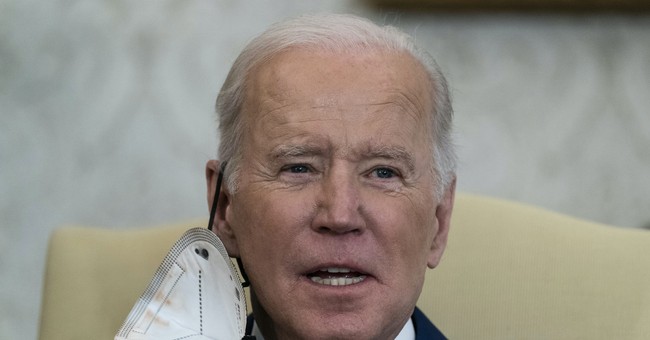 More than a year into the Biden presidency, any rational, objective person can clearly see “it.”

Regardless of how the Democrat Party and its liberal media sock puppets try to spin it, Joe Biden is just not right. Now, more than three dozen Republican lawmakers are calling on the oft-confused 79-year-old president to undergo a cognitive test — just as Donald Trump did while he was in the White House.

As reported by Fox News, 37 House Republicans joined Rep. Ronny Jackson (R-Texas) — a former physician to three presidents — in a letter to Biden expressing concern about whether he is “fit for office.”

My colleagues and I are again asking President Biden to immediately undergo a formal cognitive screening exam, such as the Montreal Cognitive Assessment (MOCA).

As a former physician to three Presidents of the United States, I know what it takes mentally and physically to execute the duties of Commander-in-Chief and Head of State. Joe Biden has continually proven to me and to the world that something isn’t right. The American people deserve to have absolute confidence in their President’s cognitive ability.

This is not a partisan issue. When I discussed taking a cognitive test with President Trump, he was eager to assure the American people and to put the fake news media’s stories to bed. Why won’t President Biden do the same?

We can only assume the worst if he doesn’t submit to the same standard that his own party demanded of the last Administration. The precedent has been set.

So here’s the logic question of the article: If Joe Biden truly believes his mental acuity is just peachy, why does he continue to reject calls to submit to a cognitive evaluation? Seems to me he and the Democrat Party would welcome the opportunity to prove it — and shove it the GOP’s face.

The dirty little non-secret secret is that those closest to Biden, the lapdog media, and the entire Democrat Party are not only fully aware of his declining mental state; their panicky efforts to shield the guy from the media — and thusly the American public — belie their protestations to the contrary.

Jackson said Biden taking “the cognitive test will be an important first step” to reassure Americans that he is fit for office. Or, he told Fox News, the test could help “in identifying and properly treating symptoms of impairment that are consistent with a variety of cognitive diseases, such as Alzheimer’s, vascular dementia, Parkinson’s, or multiple sclerosis.”

We can only assume the worst if he doesn’t submit to the same standard that his own party demanded of the last Administration. The precedent has been set.

In the letter, the Republicans said they “believe that, regardless of gender, age, or political party, all presidents should follow the example set by former President Trump to document and demonstrate sound mental abilities.”

And then, of course, Biden’s November exam:

While you underwent your annual physical exam on November 19, 2021, you either did not face a cognitive test or those results were withheld from the public.

The Alzheimer’s Association lists ‘changes in mood and personality,’ including being more ‘easily upset’ as one of ten signs of mental decline.

You displayed this type of mood change during a cabinet meeting on January 24, 2022, when you apparently did not know your microphone was on after finishing your opening remarks, and you called a White House reporter a ‘stupid son of a b—‘ [Fox News White House Correspondent Peter Doocy] in response to a question he asked on inflation.

As noted by Fox, the lawmakers also pointed out that Biden’s “slip-ups” are “not just a recent trend,” and that his “mental decline and forgetfulness have become more apparent over the past two years.” To deny that is to deny reality.

So here we find ourselves.

A 79-year-old president clearly in mental decline, who not only doesn’t realize it or refuses to acknowledge it but also suggests he going to run for re-election.

Vs. Kamala Harris, the most incompetent vice president in at least modern history, waiting in the wings. Oh — and two-time-loser Hillary Clinton champing at the bit (no pun intended), still delusionally believing she deserves to be president.

The 2024 presidential election, by most indications, should be the Republicans’ to lose. While I’m not suggesting there won’t be “those among us” who will try their damnedest to do so — another discussion for another time — one can only imagine what the next four years or more would look like if they do.