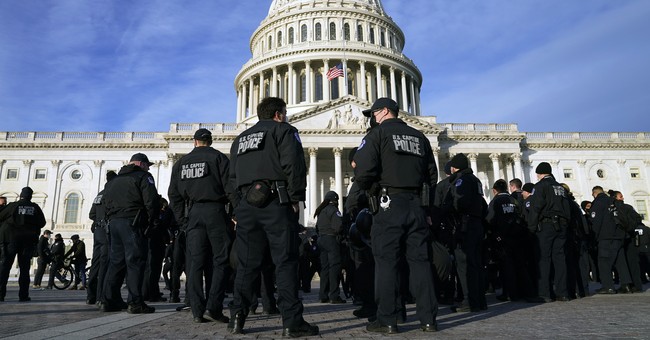 We have previously reported on the troubling stories of the Capitol Police surveilling Republican members of Congress, their staff, and even people with whom they are meeting.

The Republicans wrote that the report revealed the Capitol Police are also “monitoring the online activity of congressional staff and individuals who meet with Members of Congress” and that the force is “reviewing property tax information” to learn the owners of the buildings “where the meetings take place” as well as “reviewing online information to determine if any of the meeting attendees have contacts with foreign nationals.”

“Additionally, Capitol Police were directed to look for information on donors and staff ‘that would cast a member in a negative light,'” the letter reads.

“If true, these allegations are serious violations of Americans’ civil rights and civil liberties,” it continues. “Our constituents have the right to petition Congress and they should be able to exercise this right without fear that Capitol Police will scrutinize their property taxes, social media, or relationships.”

The lawmakers said the report “also leaves many serious questions unanswered,” such as if the Capitol Police routinely looks into the backgrounds of Americans meeting with lawmakers or if the investigating has been done with the knowledge and approval of the lawmaker they’re meeting with.

Now, unfortunately, asking Pelosi to look into this is probably not the best idea, because not only can’t you believe anything she says, but one has to ask why the Capitol Police were doing this, to begin with — and who might be behind it.

The Capitol Police didn’t deny it, they just tried to justify it in a statement as necessary for security reasons.

“The more public information we have, the better we can understand what kind and how much security is necessary,” the statement said.

Uh, yeah, no. None of what they are allegedly doing sounds justifiable by trying to ensure security.

Here’s a sample of what they allegedly did to Sen. Rick Scott (R-FL).

Analysts also were tasked with sifting through tax and real estate records to find out who owned the properties that lawmakers visited. For example, the unit scrutinized a meeting that Sen. Rick Scott (R-Fla.) held with donors in a private home. Analysts eyed the homeowner’s and attendees’ social media accounts, and looked for any foreign contacts they had.

“These reports are incredibly disturbing,” Scott spokesperson McKinley Lewis said in a statement. “It is unthinkable that any government entity would conduct secret investigations to build political dossiers on private Americans. The American people deserve to know what Chuck Schumer and Nancy Pelosi knew and directed, and when. Senator Scott believes the Senate Rules Committee should immediately investigate.”

But perhaps the most troubling encounter was that experienced by Rep. Troy Nehls (R-TX) and he’s calling the statement that the Capitol Police have now issued a “lie.”

Capitol Police accessed his office without his permission last November and they took a picture of confidential legislative information that he had including a picture of his whiteboard on which he had the term “body armor” listed. They then came back two days later dressed as construction workers, encountered one of Nehls’ staffers, and grilled him about the picture they improperly took. The reference to “body armor” referred to a federal contractor in Texas who had committed fraud by supplying Chinese-made body armor instead of U.S.-made body armor.

Now the Capitol Police have issued a completely unbelievable statement about their actions.

“The United States Capitol Police is sworn to protect Members of Congress. If a Member’s office is left open and unsecured, without anyone inside the office, USCP officers are directed to document that and secure the office to ensure nobody can wander in and steal or do anything else nefarious. The weekend before Thanksgiving, one of our vigilant officers spotted the Congressman’s door was wide open. That Monday, USCP personnel personally followed up with the Congressman’s staff and determined no investigation or further action of any kind was needed. No case investigation was ever initiated or conducted into the Representative or his staff.” – U.S. Capitol Police Chief Tom Manger

I don’t know about you but I’ve never seen police securing property taking pictures of documents and information and coming back two days later to then grill staffers dressed as construction workers. If they were just “securing” the room, why were they then investigating what was written on the whiteboard? Now they claim they hadn’t “initiated” an investigation. Then why did they come back two days later, dressed as construction workers? Sorry, guys, but this doesn’t make sense.

Nehls called it a “bold-faced lie.”

“The issue is not whether or not the officer entered the office legally, the issue was the ‘vigilant’ officer in question took a photo of private Congressional material that is protected under Article I Section 6 of the speech and debate clause in the US constitution,” Francesca Granato, a spokesperson for Nehls, said in a statement. “Imagine leaving your front door open and police officers enter your private home, take pictures of the inside, and then open a criminal investigation based on those pictures.”

“How can Chief Manger issue a statement, and fail to mention the photograph that was illegally taken?,” Granato added.

Nehls suggested he was being targeted because he has been critical of Pelosi and the Jan. 6 Committee.