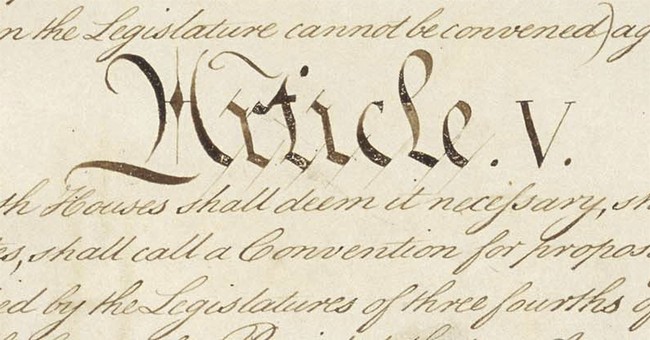 The federal government has been throwing around taxpayer dollars for decades with seemingly little to no care. The spending in Washington is so bad that politicians are using our children’s children’s children’s money and there seems to be no sign that it’ll stop. All clues point to the fact that what we’re looking at is a full-on addiction to spending.

That’s why many states have now called for a constitutional convention in order to amend the legendary document, effectively limiting the amount of spending the government can do, and while it’s an uphill battle, it’s now reached the halfway mark.

According to Fox News, since the federal government can’t seem to get itself under control, states are stepping in to handcuff Washington. So far, seventeen states have agreed to a convention with Nebraska being the latest. It doesn’t just stop there, either. It also seeks to put term limits on members of congress:

The Nebraska Legislature passed a resolution Jan. 28 calling on states to begin the formal process to pass constitutional amendments that would limit the federal government’s spending and jurisdiction, as well as set term limits for members of Congress.

“What’s driving this as much as anything is overreach on the part of the federal government,” Nebraska state Sen. Steve Halloran, who sponsored the resolution, told Fox News.

“The Founding Fathers had anxiety that that might happen,” he said. “I don’t believe they imagined that it would get to this point.”

In order to call a convention, it has to be agreed upon by 34 states making Nebraska the halfway mark in an ongoing quest that’s been in the works since 2013. If it does happen, Fox News noted that this type will be the first in the country’s history:

The resolution has passed one chamber in eight states, and legislation is pending in 15 more state legislatures. A convention of states under Article V has never been called.

Amendments instead have been proposed through Congress. Only 27 have been added since the Constitution was adopted.

“We have to look at the historic surroundings of when the Constitution was drafted in Philadelphia in 1787 and understand full well what the Founding Fathers had in mind for the states to have equal footing with the Congress in proposing amendments,” Halloran said. He told Fox News he believes this is the states’ opportunity to reclaim powers they relinquished to the federal government.

The likelihood of 17 more states signing on is unlikely at this time, but it’s not exactly something that’s been popularly discussed. Many have no idea about the ongoing effort to call a state convention, but if it became popular among the people, you’d likely see the process speed up a bit more.

This would also be something of a great test to see who is here to serve and who is here to be served. It’s tough to imagine D.C. politicians, especially ones who have been there for decades, suddenly giving up their cushy positions, even Republicans. Even support for the idea of this convention would go a long way in showing us who is here for the right reasons.