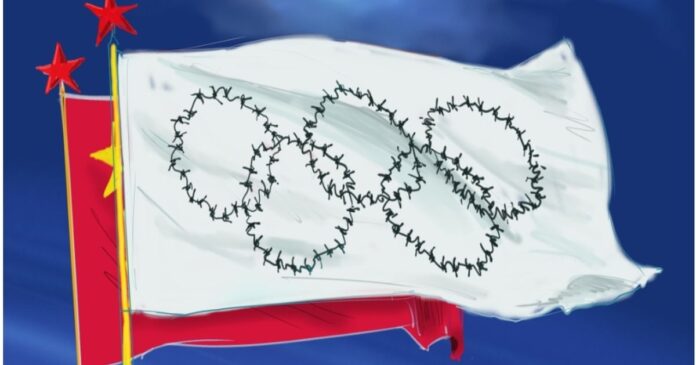 The Winter Olympics are less than a week old, and they’re already melting like a snowman made of sleet.

The IOC accepted China’s Winter Games at its 2015 meeting knowing full well what China would represent and present. For example, the photos submitted by China in its bid showed the downhill venues free of snow. All of what we expected has come true and COVID has been added to China’s flaming dumpster fire of an Olympics.

Bejing and a city called Zhangjiakou are co-hosting China’s Olympics. The Games kicked off as they should, when a Chinese thug roughed up a reporter for standing in the wrong spot. Every country has warned reporters and athletes not to complain, and watch what you say or write on a phone, computer or tablet. China is spying on everyone there.

Athletes who left their home countries free of COVID, landed in China only to discover that they tested positive on landing. Those unfortunate athletes where escorted to quarantine, unable to train. Maybe a quarantine cell is better than the Olympic “village.” Rooms are reportedly freezing like a 19th century prison cell and the food is apparently god-awful. Athletes can’t train. Some can’t eat their own food. My guess is the Chinese athletes are doing fine.

Athletes are forced to wear masks everywhere – and I mean, everywhere.

Winter Olympics are in the winter, but both host cities are snow-free. The average snowfall according to the Google Machine, is about one inch. The “snow” for this Olympics is all manufactured. It’s fake like the Uyghur woman that China paraded out on opening night like a she was a pet puppy.

And finally, the air quality. It is not quite as bad as living inside a catalytic converter, but it’s pretty bad. The next two days, Wednesday and Thursday, are officially “unhealthy” according to the AQI index – and that’s after CCP likely shut down industries so athletes don’t choke on the soot. Happily, all the athletes can wear their masks to bed and that might help keep them warm.

I haven’t watched a second of NBC coverage. America has tuned out, too. Good.