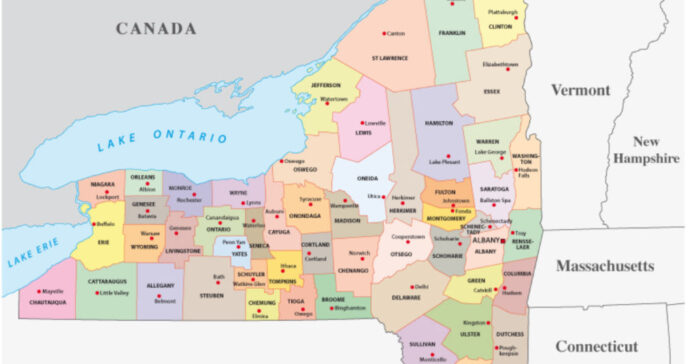 The Democrats may be shady and backhanded, but they aren’t stupid. They’ve seen that a red wave is coming, and they’re doing everything they can to push back. One of the ways they plan to do that is by creating more seats for themselves in the House.

New York, a relatively blue state, has recently undergone some new congressional mapping. And, it appears that they have managed to rally up a few more blue seats for representatives to sit in.

We’d like to say that we’re surprised, but we’re not.

There are 27 House seats designated for the state of New York. This includes ones that are currently occupied by 19 Democrats and 8 Republicans.

The state’s population has decreased in the past year – and that may be another sign that people are sick and tired of the legislation being passed by Democrats. People are packing their bags and moving south to warmer climates and mask-free states like Florida and Texas.

Although the state is losing a seat, the new maps help to draw new territorial lines.

It would mean that instead of having 19 seats being held by Democrats, it could be as many as 22. This poses a problem for the GOP. In order for the red wave to occur, we need to flip as many seats as possible – at least 11.

With three more seats being added in favor of the Democrats, it would mean that we’d need to flip at least 14 seats. It’s not impossible, but it certainly means that it’s going to be more of a challenge.

The Democrats of New York are most certainly aware of what they are doing – and what they hope to gain with this move.

The maps haven’t been approved – yet. However, with the Dems having such a lead within the New York state government, it’s a matter of when not if.

This would be the first time in decades that the Democrats get to control the mapmaking process for the House district – and they’re most certainly taking advantage of it.

The new maps would involve taking districts in Long Island, Staten Island, and Syracuse. While these seats usually involve quite a bit of competition, they elected Republicans in 2020. With the new district outlines, it would push more Democrats into each of these districts, making it more likely that the new Representatives voted in for 2022 would be Democratic.

Quite a few of the districts would get a shake-up. Kathy Hochul, New York’s governor, has already said that shell sign any legislation that focuses on district lines.

By creating the new map, it would place the Democratic voters right where the Democrats need them to turn an entire district blue. It could make it harder for members of the GOP to run, let alone get a victory – and this is just what the Dems have been looking to do.

Everything they’re doing is legal, but there are other ways that the maps could have been drawn, too. The only way that a red wave can come to New York is if the voters who traditionally vote blue really show off just how much they hate some of the new liberal legislation that has been passed across the state. It could show the Dems once and for all that their progressive tricks aren’t all that they had hoped that they would be.