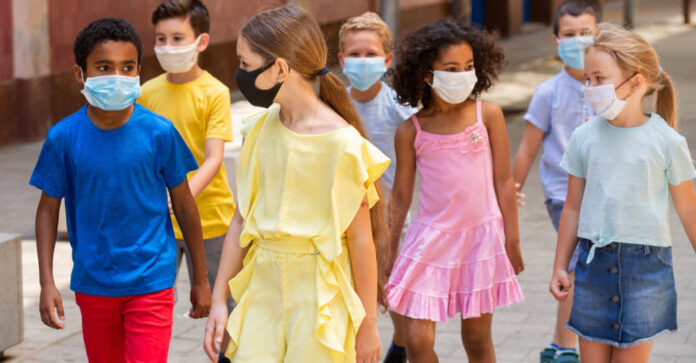 The pointless attacks on the youth of America continue across the country in the classrooms of schools. The worst of the assaults come from Democratic-controlled states. These mafia-style enforcers believe that any patriotic support or show of concern warrants an attack. These paranoid teachers do not care how old the child is or what their heritage may hold; they attack and violently shame the student.

One substitute teacher decided that a young teen could not support their father by wearing a blue line mask. The young teen is named Lucas Lillard. He loves the fact that his father is a police officer. And he is even more proud that his father protects the community.

Lillard was even compliant enough to wear a mask to school. But when the substitute saw the blue, they immediately flew into a rage and told the student that the “Thin Blue Line” on the mask “That’s not the American flag; that’s the new confederacy flag.” In other words, any support of the police and law enforcement is not tolerated and is seen as a threat to the definition of America that the liberal has developed.

The color blue has come to represent law enforcement. Police officers are the entity that enforces the law and keeps the country from diving headlong into chaos. Liberals see blue, turning them into blood-thirsty bulls looking to kill the offender. Extreme liberals would love to live in a state of chaos because they would be able to live by a code of ethics dictated by how they feel at any given time.

The hostile environment that the Democrats create towards police officers spills over to their families. Lillard reportedly stated that he is concerned that his dad is a police officer. He knows that the hatred towards them will affect him. The hostility of the thin blue line that represents law enforcement is the marker that sets off the liberals into a state of violence. And as this so-called teacher has proven, it can happen to any person.

The Department of California Highway Patrol knows the seriousness of the thin blue line. The department has since issued a statement that bars officers from displaying the line because of its effect on violent liberals. They stated that All ‘Thin Blue Line’ paraphernalia, including anything resembling it, shall be removed immediately. This includes any paraphernalia hung anywhere in the office, stickers/patches on State or personal; property that may be seen by the public during duties, and email signature blocks.”

The rule is for the protection of the officers and their families. It is a sad day when law enforcement officers have to hide while off duty so they do not become targets of violence.

All Lollar was trying to do was support his father and have enough pride to show his love for his father and what he does for the community. But the nasty teacher had to make an example out of the boy and make himself feel powerful over a tiny teenager.

The department’s memo does not extend to displaying support to the officer’s family. That thin blue line also represents support and honor for fallen police officers. These are public servants that have died protecting the innocent from violent offenders. But when then liberals support the murderers and try to vilify the protectors, there is no limit to the ensuing harm.

The mask dilemma continues to be a point of contention for many people. And masks that show support for fallen heroes make even bigger waves. But the point is that people have the right to support causes that make sense. And for a substitute teacher to blast away against student support.

The Democrats will keep pushing divisive issues until they are voted out of office. They create the issues they push to keep people from seeing the real nastiness of their hearts. The liberals will never support law and order because they need it to become extinct so they can involve themselves in activities that would otherwise be illegal.