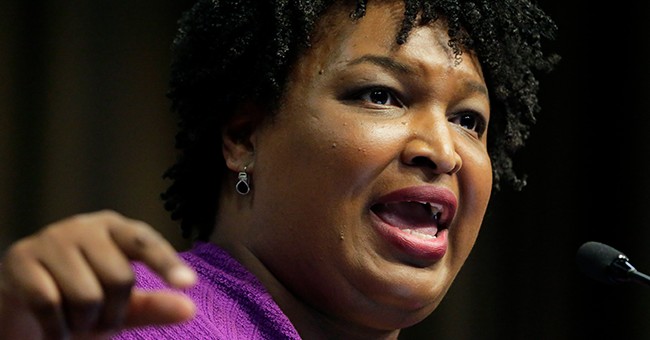 Sometimes, the best thing a politician can do is to put the shovel down when they are caught in a compromising position. Stacey Abrams must not be aware of that adage.

As RedState reported previously, Abrams decided it’d be a great idea to post a picture of herself maskless while surrounded by masked children. The issue with that is obvious. Children are at less risk from COVID-19 than fully vaccinated and boosted adults. Because of that, other countries long ago stopped masking young children, if they ever did, because it’s such a pointless, ineffective, and damaging practice. That makes it especially egregious when some politician ditches the mask at a school, grinning ear to ear, while all the kids are muzzled.

Abrams and her handlers, perhaps realizing how bad of a visual the picture was, quickly deleted the picture and put out a statement charging racism was behind the criticism, because what else would they charge? After that, The Atlanta Journal-Constitution, a far-left newspaper, set out to try to clean up the mess. In doing so, though, they got a comment from Abrams that only dug the hole deeper.

So let me get this straight. Abrams took her mask off so that people could hear her as if children don’t have that exact same problem. Then, instead of putting it back on, she left it off to have a photo-op, but only under the condition that the children she’s with were all forced to wear masks? Such behavior is not only hypocritical, it’s completely unscientific. Abrams is fully vaccinated. Why would kids, who already aren’t strong vectors for the virus, need to be masked to be around her?

It’s deeper than that, though. Forgetting the lack of science at play here, anyone who is still supportive of masking children is showing themselves to be completely irrational. They are also showing themselves to be willing to hurt children to score political points with a certain segment of the population that is irrationally hysterical about COVID-19. School mask mandates are asinine, and Abrams supporting them should be disqualifying.

Is this the kind of governor Georgia wants to elect in November? One who will flaunt her privilege while demanding kids be masked to make herself feel better?

Lastly, you can take this episode as more evidence that Abrams is not the supreme political talent she’s made out to be. After all, her big claim to fame is losing by 50,000 votes to Brian Kemp the last go-round and not conceding. Since then, she’s shown an ability to garner donations and run a dark money-fed voting operation, but that’s a different game than actually running a successful campaign for governor.

Her political instincts responding to this masking incident were terrible. Once she deleted the picture, that was an acknowledgment she had screwed up. To then turn around and charge racism while doubling down only makes her look weak and pathetic. Further, it oozes a political arrogance that she can’t afford to have in a state like Georgia. She’s not running in New York, and if Abrams doesn’t realize that soon, the current polls showing her getting blown out by Brian Kemp are going to become a reality.