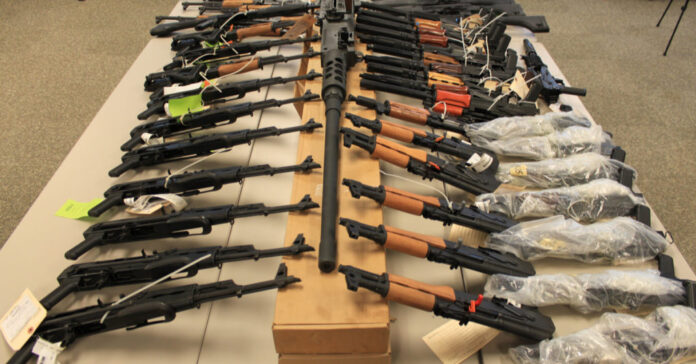 Recent reports from the Washington Free Beacon said the Bureau of Alcohol, Tobacco, Firearms, and Explosives, (ATF) under President Biden has amassed a database detailing well over 900 million firearm purchases by Americans. The report dated 31JAN2022 gives first-hand knowledge of the ATF’s actions, and it should be troubling to every American.

“The ATF disclosed to lawmakers that it manages a database of 920,664,765 firearm purchase records, including both digital and hard copy versions of these transactions.” Let that sink in for a moment. This isn’t just the inquiries (although there certainly must be a database for that, too) but 920 MILLION firearm sales are being recorded and saved by the ATF. This is an infringement on our rights and on the second amendment.

It makes no difference if the database is informal or done formally. Rep. Michael Cloud (R-LA) has been at the forefront of opposing this idea. His tireless fight to avoid this occurring is a beautiful thing for America. When the ATF directly admits to lawmakers that they are managing a database of anything, it should be troubling. They have a history of using that database against the average citizen, and we have seen the disastrous results that it yields.

Rep. Cloud warned about what this database could mean for Americans. “A federal firearm registry is explicitly banned by law. Yet, the Biden administration is again circumventing Congress and enabling the notably corrupt ATF to manage a database of nearly a billion gun transfer records…Under the president’s watch, the ATF has increased surveillance of American gun owners at an abhorrent level. The Biden administration continues to empower criminals and foreign nationals while threatening the rights of law-abiding Americans. It’s shameful and this administration should reconsider its continued attacks on American gun owners.”

The biggest thing that this administration and the ATF tend to overlook is how most crimes involving firearms being committed in the U.S. are being committed with firearms that are procured illegally. Law-abiding gun owners are not the problem. It’s the trigger-happy people who cannot get them legally or those who choose to step outside the law that cause the most problems for Americans. This data is indisputable, and yet at every step, they keep finding a way to overlook it.

An illegal database needs to worry every American. While we all suspect this has been going on for years, it must be stopped immediately. Another database does nothing to protect American interests or American citizens. It just serves to be utilized to accuse innocent Americans of crimes, and to go on a gun confiscation hunt – something the progressive left has been foaming at the mouth to do for decades.

The ATF has stated that this database is for tracking firearms used in crimes, but that explanation makes zero sense. Firearms used in crimes are recovered and cataloged into evidence or go unfound. The ballistics are recorded when they are used, and they have a legal database of that. So, the database of who purchased what and when makes no sense. They already keep ballistics records on file when the gun is purchased new so that paper trail is already is in existence without the new purchase database.

Making more data available to law enforcement can be a valuable tool in many instances. However, in this one, it makes no sense. Those committing crimes are doing what is necessary to stay off those databases, so tracking them is incredibly difficult. To illegally track innocent Americans in the name of justice is a grave overreach, and something our founding fathers would never stand for. They dumped tea into the harbor for less.