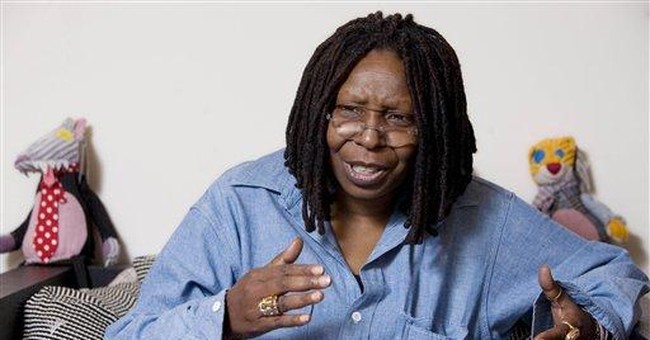 The hits just keep coming for Caryn Elaine Johnson — AKA: Whoopi Goldberg — in the aftermath of her on-air claims about the Holocaust, during which an estimated six million Jews died at the hands of Adolf Hitler’s Nazis. But as Whoopi saw it, earlier this week, the near-extermination of Europe’s Jews was “not about race.” As the fallout from that hot mess continues, a previous related controversy has re-emerged.

The co-host of the “critically-acclaimed” [heavy sarc] “The View” found herself in a fix on Friday, after the resurfacing of a 1993 recipe she wrote for a charity cookbook.

The problem? The title of the recipe: “Jewish American Princess Fried Chicken.” Yeah.

Whoopi, Whoopi, Whoopi. As reported by The Daily Mail on Friday, the long-forgotten charity cookbook, titled “Cooking in the Litchfield Hills,” contains a recipe from Whoopi in which she mocks Jewish-American women in a step-by-step process for creating the recipe — with “off-color anecdotes in jest.”

Send chauffeur to your favorite butcher shop for the chicken (save the brown paper bag). Have your cook:

1) Melt equal parts oil and butter 3/4 deep in a skillet over moderate heat.

Then you tightly close top of bag (watch your nails) and shake 10 times.

Hand bag to Cook, go dress for dinner. While you dress, have Cook preheat oven to 350 degrees and brown chicken slowly in skillet. When evenly browned, have Cook place chicken in dish in oven.

Have Cook prepare rest of meal while you touch up your makeup.

In about half an hour, voila! Dinner is served! You must be exhausted.

As noted by Daily Mail, the “Jewish American Princess” recipe was met with “intense backlash” at the time by the Anti-Defamation League, which labeled it “insulting” and “anti-Semitic.”

Welp, how’d that all turn out almost 30 years later? Understandably, the emergence of the recipe only adds fuel to the “Whoopi Goldberg is an anti-Semite” bonfire. Rightly so — unchanged patterns can be devastating. And certainly, Whoopi’s “humorous” recipe was rife with stereotypical nonsense.

“Jewish American Princess” (JAP) has long been a phrase used to disparage and portray some Jewish women as spoiled, entitled, and selfish — all attributed to a pampered or wealthy background. That said, was anti-Semitism really behind the ill-conceived humor of 1993 Whoopi Goldberg? I don’t know. And neither does anyone else — except Whoopi Goldberg.

Either way, should Whoopi have checked herself and not submitted the recipe? 2022 Mike Miller says yes.

But what about 2022 Whoopi’s disgusting Holocaust comments earlier this week? Should that Whoopi have been more aware than 1993 Whoopi and not even gone there? Hell, yes, she should have. Should she have received the suspension as a result? Absolutely. Now the real question:

Should ABC fire Whoopi Goldberg for her clearly anti-Semitic Holocaust comments on “The View”?

Let me answer the question this way.

With the hypocrisy-detecting “shoe on the other foot” test, that is. If a Fox News host — or any other high-profile conservative — made exactly the same comments made by Goldberg, would the histrionic meltdown on the left reach epic proportions until the “racist,” “guilty as hell,” “anti-Semite” was fired? Oh, hell, yeah.

That’s my answer. For now.

Whoopi Goldberg Suspended by ABC After Doubling Down on Antisemitic Comments