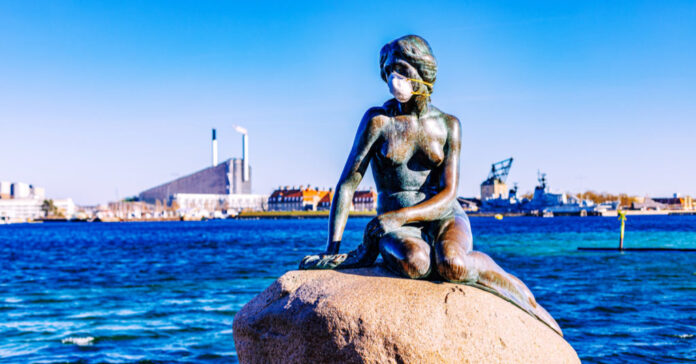 We’ve already heard that the U.K. plans to drop all of its COVID mandates and restrictions. Now, Denmark is announcing that they are dropping all of theirs.

Meanwhile, in the U.S., we’re still pushing new and harsher mandates on the American people. Depending on the state a person lives in or the industry they work in, they’re being told that they have to wear a mask and get not only the vaccine but also the booster. LA County even announced that workers have to wear N95 masks, which can literally smother a person over the course of an 8-hour shift.

There’s one thing we’ve noticed after dealing with the pandemic for over two years. The mandates aren’t causing cases to drop. The country is at over 60% vaccinated. Yet, we’re seeing COVID case numbers that are almost as high as they were before vaccines were even available.

It might be time that we take some cues from our neighbors across the pond.

What is Denmark doing, exactly?

Denmark is the first member of the EU to list all of its domestic COVID restrictions. Despite having some high cases, they have a high vaccination rate. As such, they don’t believe that there is a “critical threat” anymore.

Essentially, they are ready to get back to everyday life. They have done all that they can do, they’re willing to admit that, and they’re letting people gain their freedoms again.

America is the land of the free – how come Denmark has more freedom than we do?

That’s a great question and one that we can only answer by pointing an accusatory finger at Biden and the rest of the liberal White House.

Lone Simonsen, an epidemiologist at the University of Roskilde explained “We have an extremely high coverage of adults vaccinated with three doses. With Omicron not being a severe disease for the vaccinated, we believe it is reasonable to lift restrictions.”

That’s the thing. You can only tell people to get vaccinated and show them that it’s a chance to avoid hospitalization or any severe medical fallout. You can’t force people to get vaccinated. At this point in the U.S., everyone has had the opportunity to get the jab. If they don’t want to, they are adults. They are free to make their own decisions and live with those consequences.

At no point can people say, “I didn’t know.” They do know. But they’d rather hold onto all of their freedoms than be told that they HAVE to get vaccinated.

In Denmark, people don’t have to wear masks for going shopping, eating in restaurants, or riding on public transportation. If people want to gather indoors, they can do so without having to worry about social distancing rules. And, the contact-tracing app that was in place is no longer required.

In the U.S., those who have been vaccinated are still required to follow the same mandates as the unvaccinated. It’s as if the government has decided to punish those who followed all of the rules.

Danish Prime Minister Mette Frederiksen was excited when he wrote on Facebook, “Good morning to a completely open Denmark.” Talk about a great promotion to enhance their tourism. Anyone who is tired of mandates even though they’ve been vaccinated may be booking the first flight out to Copenhagen.

The Danish Health Minister explained to CNN, “No one can know what will happen next December. But we promised the citizens of Denmark that we will only have restrictions if they are truly necessary, and we’ll lift them as soon as we can.”

Trump promised that if we did as we were told for three weeks, we could get back to normal. This is the longest three weeks ever. If Trump were still in the White House, we would be following suit after the Danish, if we hadn’t already ditched all of the mandates.

At this point, we have to hope that enough countries will lift the mandates so that Biden has no choice but to follow.