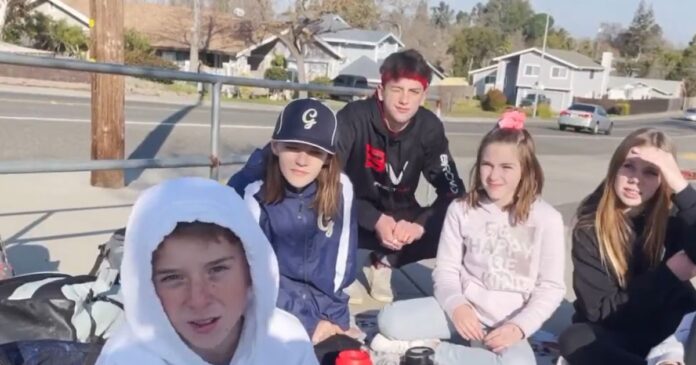 Students across California aren’t taking it anymore, and administrators are becoming increasingly evil and dangerous in their retaliation. Friday morning a group of students in the San Juan Unified School District showed up unmasked to protest mask mandates that they’re forced to endure while the man who instituted them gallivants around the state flashing his unmasked pearly whites, and they were kicked to the curb.

Actually, they were sent to the curb, to sit on a street corner outside school grounds, unsupervised. Given the trajectory of school administrator abuse in this country, a literal “kicking” to the curb isn’t out of the realm of possibility.

One mom posted a video of the courageous students sharing their stories.

Others joined in, saying, “We’re right by the street.” “Nobody is supervising us either.” “None of the staff has come out here to try to supervise us.”

This is child endangerment, pure and simple.

An ad released Thursday by N2 America really puts what’s been done to our children into focus. Painfully into focus.

These children have shown more courage and fortitude than about 90 percent of the adults in this country, and it’s glaringly apparent at this point that all school administrators want is the flow of money and the perpetuation of their authoritarian regimes. Alas, the revolution has begun.

(As of the time of publication, the school district hasn’t made a statement.)