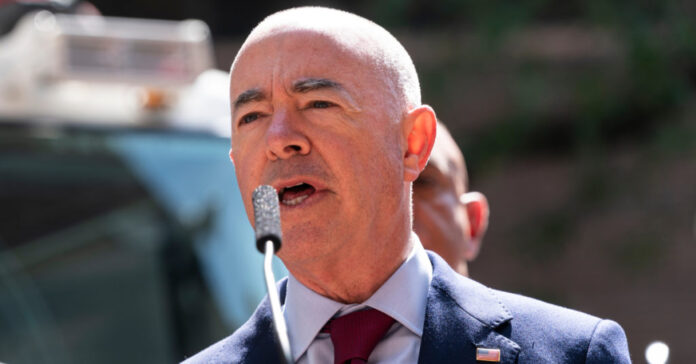 Alejandro Mayorkas, the Secretary for the Department of Homeland Security, just had a pretty intense meeting with some border patrol agents according to leaked audio of their exchange.

There is chaos at the border due to the fact that President Joe Biden has overseen the largest influx of migrants coming over the southern border in decades. There have been 178,840 illegal crossings that occurred in December 2021 alone. This is higher than the totals in December from 2020, 2019, and 2018 combined.

The Department of Homeland Security Secretary had to acknowledge to border patrol agents in the Yuma Sector that the border was worse now than it has been in the last 20 years. He went further stating, “if not ever.” This is according to an audio recording of their meeting that was obtained by “Townhall” reported Julio Rosas.

Mayorkas said, “The job has not gotten any easier over the last few months and it was very, very difficult throughout 2021. I know apprehending families and kids are not what you signed up to do. And now we got a composition that is changing even more with Cubans, Venezuelans, Nicaraguans, and the like, it just gets more difficult.”

He went on to acknowledge that the policies of the Biden administration are not particularly popular with U.S. Customs and Border Protection. He said these policies are the reality and they have to see what they can do within the existing framework. According to Julio Rosas, one agent even turned his back on Mayorkas.

A border patrol agent challenged Mayorkas on how the DHS can reconcile the message that border security is the main mission for Border Patrol, but agents are not given the authority to patrol the border because of the policies the White House administration has put into place. The agents at the border are being used simply to process the thousands of illegal immigrants.

Mayorkas said that he appreciated the candor of the agents and said that he was working to make sure that agents have the people, the funding, and the equipment they need to do their job. But the agent responded that they have been hearing those same words for years now. After asking the question of Mayorkas, the agent turned his back on the Secretary.

Another border patrol agent said that it had been “demoralizing” to see how leaders in Washington have “demonized” agents. Mayorkas said that he could identify with being “demonized.” He said that his family have received threats.

When Mayorkas talked about the border being worse now than in the last 20 years if not ever, according to Rosas, agents at the meeting said that he was visibly upset.

It’s not just the high levels of illegal immigration that have raised national security concerns under the watch of President Biden. He has also overseen rising fentanyl imports. The amount of fentanyl that federal law enforcement intercepted between October of 2020 and September of 2021 increased to 11,201 pounds. This is up from 4,791 pounds the previous fiscal year.

Criminal drug networks in Mexico are using what has become a perfect drug trafficking tool: social media applications that come with every smartphone.

Anne Milgram, a DEA administrator, said that criminals are using these platforms to flood our country with fentanyl. The nation’s unprecedented overdose epidemic is being fueled by the easy access drug dealers can have through social media.

It’s a problem. We all know it. Now, it’s a matter of whether Mayorkas is actually going to do something about it.